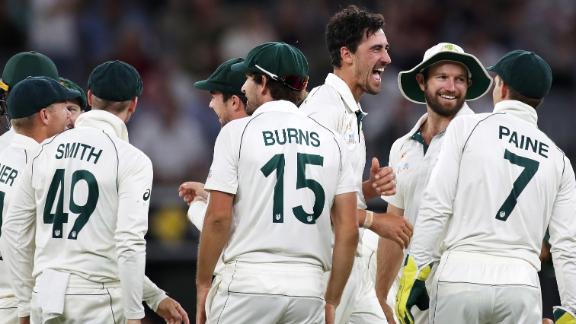 A nearby grass fire wafted the unmistakable odour of smoke across Perth Stadium early on another enervating day in the west. By the close the only fire was that being breathed by Mitchell Starc, as Australia cornered New Zealand’s batsmen under lights despite the damaging loss of Josh Hazlewood to a left hamstring strain.

Two grinding sessions in daylight saw Australia eke out 416 following the loss of early wickets before the pitch and the match burst into furious life in the third, floodlit session. Starc and Hazlewood blasted out Tom Latham and Jeet Raval in their opening overs, only for Pat Cummins to be drafted into early service when Hazlewood pulled up lame before delivering his ninth ball of the Test match.

Ross Tayor and Kane Williamson threatened to form a pivotal stand with Australia’s bowling resources shorn by a quarter, only for Starc to coax an edge from New Zealand’s captain that was intercepted by the flying right hand of Steven Smith diving into where third slip might have been. Henry Nicholls and Neil Wagner were swiftly accounted for, and Starc had a hat-trick ball bunted away by Taylor before the close.

Marnus Labuschagne and Travis Head had earlier looked capable of dominating for the hosts, but both were dismissed in circumstances they would have been disappointed by as part of eight wickets shared between Wagner and Tim Southee.

That meant the remainder of the innings was something of a slog for the Australians, as the captain Tim Paine forged partnerships with Cummins and Starc in an effort to not only advance the scoreboard but also ensure that New Zealand’s innings would commence in the harder batting conditions under lights at day’s end.

Latham certainly looked to have trouble finding the Starc short ball that lobbed off the shoulder of the bat and back to a grateful bowler to the delight of a crowd of 20,018, and Raval was even further away from a Hazlewood in-dipper that clattered his stumps after several deliveries angled across him towards the slips.

Williamson was fortunate to survive early on when a thin edge – picked up by snicko – evaded the attention of every Australian but Smith, whose strangled appeal and brief attempt to call for a review was ignored by Paine, who did not enjoy an entirely pleasant evening with a couple more painful blows to his troublesome right index finger. The early loss of Hazlewood from the attack even had Paine resorting to Matthew Wade’s speculative right-arm mediums inside the first 10 overs.

Nathan Lyon’s extravagant turn out of a day two pitch pushed Taylor into a thrilling counter-attack, and at 2 for 77 the visitors had a toehold on the match. But Starc returned and beat Williamson with one superb delivery moving away from him, and then the New Zealand skipper fenced at a wider ball to give Smith the chance to make what is now a trademark full length dive to his right for a spectacular catch.

Nicholls, never entirely comfortable, touched one of Starc’s few ordinary deliveries for the evening down the legside to Paine, and next ball Wagner was too crooked and late on a yorker that he dragged onto the stumps. Taylor and BJ Watling did well to survive the day’s remaining deliveries, but they will be starting the third afternoon with a yawning deficit of 307.

Labuschagne had begun the second day with designs on a third consecutive score in advance of 150, after a fluent start, as he and Head asserted themselves. But he was left annoyed and confounded by Wagner, who found another way past an international batsman of strong repute when he angled a fullish ball into Labuschagne from around the wicket and snaked it behind the No. 3’s pads and into leg stump. Wagner’s celebration was prolonged, indicating that like most of his wickets, this was no accident.

Head was then left with the responsibility for building the innings, but on 56 he leaned back to hammer Southee through the off side and picked out the fieldsman at cover. Head threw his head back in disgust at the dismissal, as did the former captain and sometime Australian team mentor Ricky Ponting in the commentary box.

Paine, who had made a circumspect start, was joined by Cummins, and the pair worked their way to the long break in the hope of adding plenty more to the total. They re-emerged with a clear plan to bat for as long as possible, even to the exclusion of scoring, to keep New Zealand in the field and also to ensure that the home side’s bowlers would get to use a new ball once the sun had gone down.

This made for some absorbing if not exactly pulse-quickening cricket, as the partnership soaked up 135 balls for 38 runs. Cummins was teased out by the part-time leg breaks of Jeet Raval, bowled around his legs trying to sweep after the bowling had convinced Kane Williamson to bring the deep backward square leg in from the boundary. The arrival of Starc brought a rise in the scoring rate, but Australia’s 400 was still their second slowest in a home Test since 2000.

Starc ultimately fell when an attempt to hit Southee out of the stadium finished in Williamson’s hands, and Nathan Lyon hooked a couple of boundaries before picking out fine leg to hand Wagner his fourth wicket. Paine hooked Southee into BJ Watling’s gloves to end the innings on the stroke of the tea break. Fireworks would follow.