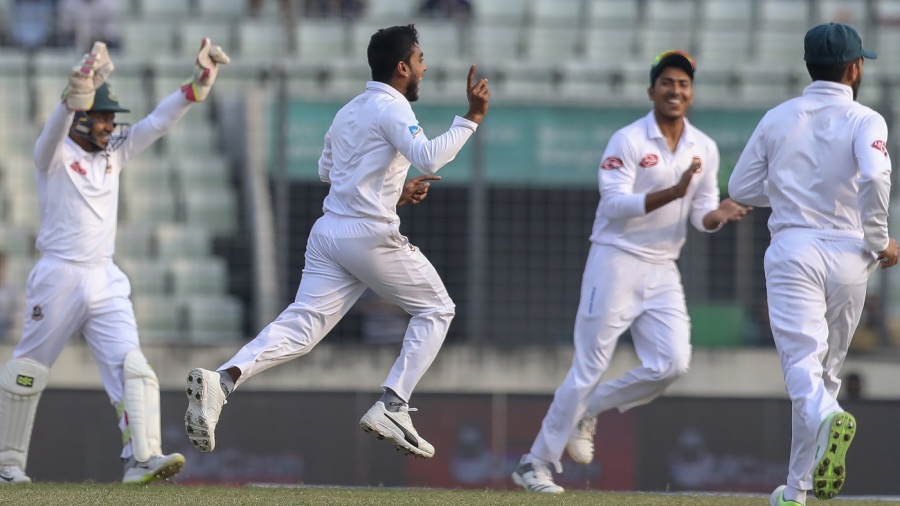 ‘Spin it to win it’ seems to be the watchword in the Bangladesh-West Indies Test series. The Dhaka pitch for the second game is likely to be as helpful to the spinners as the Chattogram surface was, although the home side will tell you that curator Gamini Silva’s work is often unpredictable.

Taijul Islam, Shakib, Nayeem Hasan and Mehidy Hasan Miraz formed a useful quartet in the first Test, taking all 20 West Indies wickets. Taijul was the pick of the bowlers in both innings, but it was his 6 for 33 in the decisive fourth innings that made the big difference. Shakib was at his accurate best, teasing and dragging batsmen out of their crease or getting them to go back to full balls with his variations in flight.

Nayeem and Mehidy, both offspinners, were crucial too. Nayeem became the youngest ever bowler to take a five-wicket haul on debut. Delivering offspin from a height is his advantage, and he is also quite accurate. Mehidy, meanwhile, snared Shimron Hetmyer, West Indies’ most aggressive batsman in Chittagong, twice.

Bangladesh’s batting, however, remains a worry. Mominul Haque struck 120 in the first innings but Mushfiqur Rahim didn’t have a good Test with the bat while Mahmudullah and Imrul Kayes struggled for their runs. Soumya Sarkar and Mohammad Mithun failed to apply themselves deftly on a spin-friendly wicket.

The same can be said about the West Indies batsmen, in particular Kraigg Brathwaite, Kieran Powell, Shai Hope and Roston Chase, who had double failures in Chittagong. Going back to sharply turning deliveries was their fault, a trap Hetmyer and Shane Dowrich, who made fifties in the first innings, didn’t fall into too often.

Sunil Ambris showed a bit of resistance in the second innings, but unless the top order contributes, winning a Test match will be difficult. West Indies, however, will be happy with how Jomel Warrican and Devendra Bishoo bowled while Kemar Roach is likely to get Keemo Paul as his new-ball partner after Shannon Gabriel was suspended for barging into Imrul.

Shane Dowrich was mostly safe behind the stumps in the first Test, while also contributing with the bat. His unbeaten 63 in the first innings was the type of resistance mixed with proactive batting that West Indies badly need in Dhaka.

The spotlight is always on Shakib Al Hasan, who claimed his first Test win at home under his captaincy in the last game. He also bowled and batted well enough to be confident of a proper recovery from his finger injury.

Following Mushfiqur Rahim’s finger injury two days before the match, Bangladesh have enlisted Liton Das on stand-by, should Mushfiqur not be deemed match-ready. There is a chance Mushfiqur could play as a specialist batsman with Liton slotting in as keeper and replacing Mohammad Mithun. Shadman Islam, meanwhile, is likely to make his Test debut in place of Imrul Kayes, who has a shoulder injury.

West Indies’ first headache would be to replace the suspended Shannon Gabriel. Fast bowlers Keemo Paul and Shermon Lewis and pace-bowling allrounder Raymon Reifer are the candidates vying for the spot.

Dhaka served up a predominantly batting-friendly pitch in its previous Test but it is unlikely to go that way in the second Test. The weather remains mild.