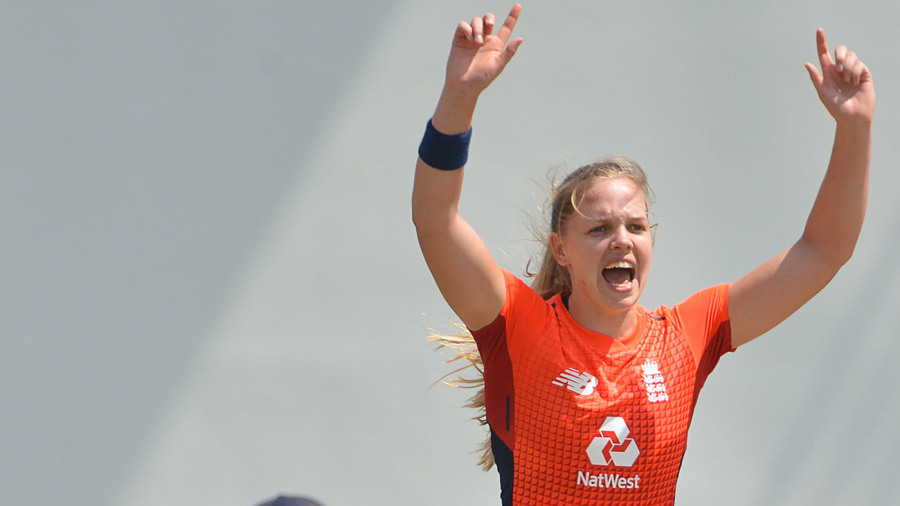 Another strong performance by England’s bowlers carried their side to a resounding victory in the first women’s T20I against Sri Lanka in Colombo.

Just as they had in Katunayake to set themselves up for a 3-0 sweep of the ODI series on Thursday, England’s bowling attack, this time led by Linsey Smith‘s 3 for 18, restricted Sri Lanka to a total of 94. Tammy Beaumont‘s unbeaten half-century meant the visitors made light work of the chase, reaching 95 for 2 to win by eight wickets with 34 balls to spare.

There were landmarks aplenty as debutant Freya Davies and Anya Shrubsole claimed two wickets apiece with only three of Sri Lanka’s batsmen reaching double figures and none of them passing 20. Shrubsole’s 2 for 20 allowed her to overtake good friend Danielle Hazell as England’s leading T20 wicket-taker with 86 wickets at an average of 13.96.

It was Beaumont’s second fifty in as matches for England after her 63 in the last ODI against Sri Lanka. Her latest score took her past 1000 T20I runs, making her the fifth English woman to achieve the milestone.

“It’s not something you really think about,” Beaumont said of passing the 1000-run mark. “My dad told me the other night how many I needed to get and I forgot when I was out there. For me it’s all about trying to perform for the team and it’s nice to get an accolade like that but more important to go one-nil up early on and put in a good team performance.”

The win was England’s eighth in a row since losing their first to ODIs on the tour of India last month and a streak Beaumont was keen to see continue.

“Winning is a habit and that’s what were trying to do here,” she said. “Two more games to go here and then a very busy summer of cricket and we’ll try to take that into the Ashes and then the West Indies.”

Fast bowler Davies described standing at the top of her mark before bowling in her first match in an England shirt with her parents looking on as “a mixture of fear and excitement”.

“It was really exciting to get out there with the girls today and get that win,” Davies said. “It’s a day you look forward to for so long, so reality was strange but really exciting.

“It’s nice to have mum and dad here. They’d have been devastated if they’d missed it and it’s always good to get a couple of wickets and get some of the nerves under control a little bit, but just happy that we came out and got a win to go one-nil up in the series.”

England lead the three-match series 1-0, with the remaining two matches to be played in Colombo on Tuesday and Thursday.