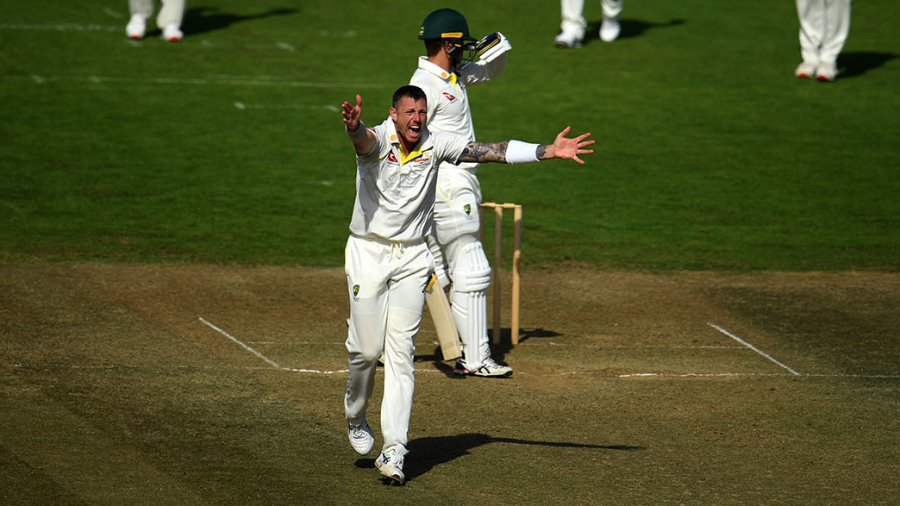 Clearer as Australia’s Ashes squad has become over the past two days of rough and tumble cricket on a sporting pitch at Southampton, another conundrum has been raised about the composition of the team to be chosen from within it.

For most of the past three years, the joint inclusion of Mitchell Starc, Josh Hazlewood and Pat Cummins has been the most straightforward element of Australian team selection, fitness permitting, of course. As three pacemen of varying heights, trajectories and bowling arms, they have often complemented each other perfectly – no more so than during the previous Ashes series in Australia in 2017-18.

England, however, poses a different conditional challenge, and on the evidence of this internal trial match and warm-up, a rather different balance may be more suited to surfaces that will offer grass to grip the Dukes ball and boundaries that will punish anything even slightly wayward.

In similar climes prepared for the Australian team in conjunction with Hampshire, albeit somewhat drier than the tourists may have wanted, the outstanding bowling displays were provided by James Pattinson, Pat Cummins, Peter Siddle and, last but not least, Mitchell Marsh.

Starc and Hazlewood, by contrast, looked sore after the World Cup and short of rhythm after injury respectively, with only a week remaining to find their best touch. Starc, having looked ginger at times on day one, batted but did not bowl on the second evening, nor was he seen on the field of play.

Even if Hazlewood and Starc do recall some of their best over the next seven days, the question remains open as to whether the Dukes ball and English grass will be more favourable to Siddle and Pattinson – apt to bowl in tandem for both Victoria and Australia – alongside Cummins and his sharp, bouncing trajectory.

This discussion will, doubtless, be difficult. Both Darren Lehmann and Rod Marsh, the selectors on duty during the 2015 Ashes, have both remarked in hindsight the difficulty of finding a way to include Siddle at the expense of one of Starc, Hazlewood or Mitchell Johnson four years ago, even though the Victorian’s skills looked ideally suited to England. When he did belatedly play at The Oval, Siddle was key to an innings victory that felt all the more empty for arriving too late to impact the series.

At the same time, there is the matter of balancing prevailing conditions with overall records, and team chemistry. How, for instance, might a brooding Starc react to omission so soon after he had been the fulcrum of Australia’s World Cup pace attack. Whatever the final call, it now looks essential that room must be found for Pattinson, who combined speed, bounce, movement and hostility with the sort of economy that will suffocate England even when wickets do not arrive so frequently. His match figures of 4 for 35 from 23 overs were highly convincing.

Other variables from day two included a low score for Marnus Labuschagne after a promising one the day before; a second brief stay for Kurtis Patterson, Joe Burns, Marcus Harris and Travis Head, handy contributions from Will Pucovski and Alex Carey, and a highly competent half-century from David Warner, by some distance the highest score of the match.

Warner’s innings was compelling in how secure he looked, ending only with a miscued pull shot at Chris Tremain that was significant in itself – in a match where edges, lbws and bowleds have been frequent, Warner was the only batsman on either side to fall to catches in front of the wicket: his defence was that sound.

Marsh, thought to be in a race with Labuschagne for a single allrounder’s spot, did his chances very little harm by bowling skilfully and briskly with the older ball, defeating Head on the crease from around the wicket and going on to clean up the tail with some panache. His bowling was also useful in 2015, leaving only questions about how he has progressed as a batsman.

In the final hour, Cameron Bancroft made a useful start to help the Hick XII build a platform for victory in pursuit of 156 to win. These were significant moments for Bancroft, who by a combination of his own contributions and also the failures of others may find himself nabbing one of the last remaining spots in the touring party that will be named on Friday.