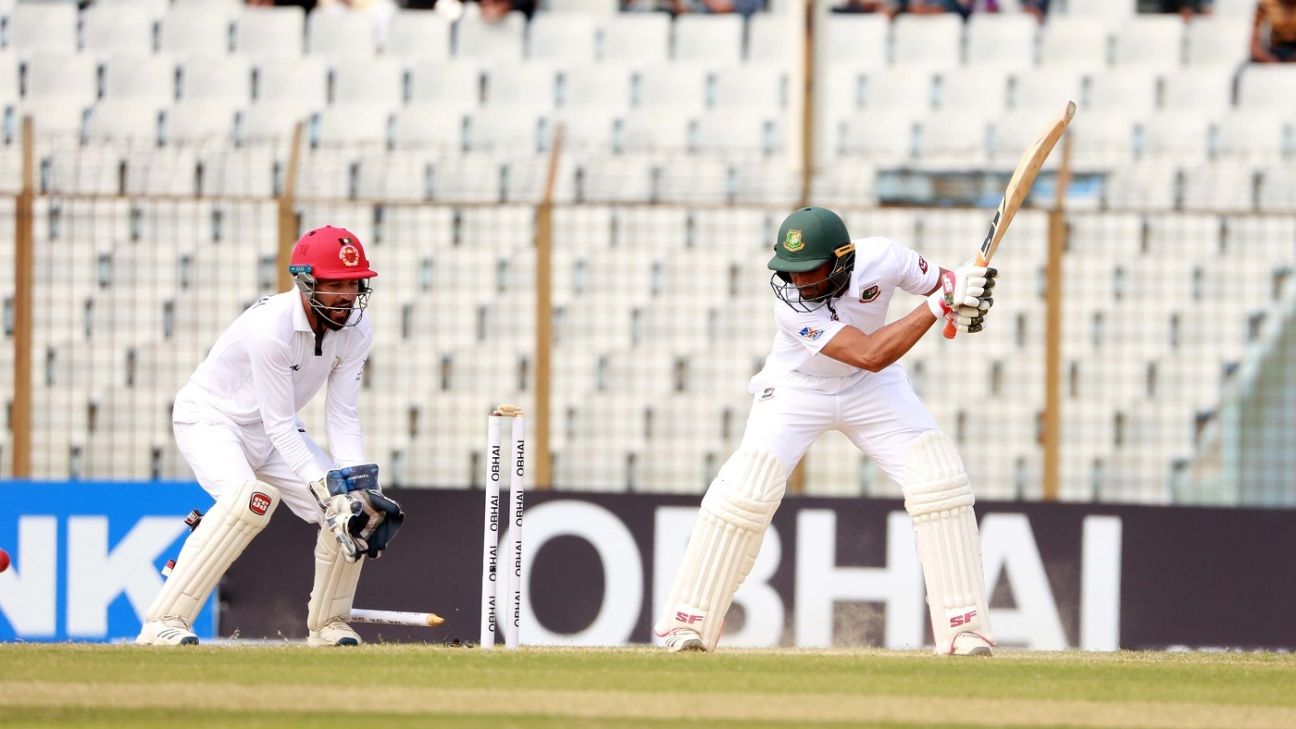 Bangladesh’s poor showing, especially with the bat, against Afghanistan has led to a heated – and public – difference of opinion between captain Shakib Al Hasan and BCB president Nazmul Hassan. The statements – made in separate press interactions on Sunday, the fourth day of the Chattogram Test – come on the back of a disappointing World Cup, where Bangladesh finished eighth out of ten teams.

Speaking to newspersons in Dhaka, Nazmul raged, “Do I explain to them how to play Tests? How they prepared themselves, the way they planned, there must have been something wrong there. I feel the plan wasn’t correct. We have to sit with the coach, the captain and the operations chairman [former captain Akram Khan] to understand why these things happened.”

One of the president’s grouses was about the selection, especially of players he feels are not cut out for Test cricket. “Soumya Sarkar, Liton Das and Sabbir Rahman are not Test player; we play them for specific reasons,” he said. “I don’t even want them to be Test players. Then what would happen to my T20 and ODI teams? We have Mominul [Haque] and Shadman [Islam], but we need more Test players in the side.”

Speaking a short while later, Shakib said: “There is room for huge planning, and it is a long process. Whenever we play badly, we talk about these things. When we win, we don’t talk about it. It is important to find the right balance.”

“Where are the pacers? We played in sporting wickets at the World Cup. Why the reversal in plans? I have to know who came up with these plans first”

On the wrong side of the spin

The lack of practice against quality wristspinners, Shakib said, was one of the reasons for Bangladesh’s poor batting. “We have both technical and mental shortcomings. We are not used to playing any kind of wristspin, although we planned and prepared against our legspinners in the nets,” he said. “Unless you are successful in the middle, that practice doesn’t work. I don’t think anything was wrong in the approach, but there are problems in our execution, or playing with a big heart.

“When you are fearful, your execution doesn’t quite come off. Liton hits everything well in T20s, but he couldn’t do it in Tests. The coach also said that we should play with a bigger heart. We play with a lot of pressure and fear. At the end of the day, it is a cricket match. But it is not everything. We end up taking so much pressure on ourselves, we make performing harder. And when we can’t perform, the pressure increases.”

He, however, conceded, that “we are getting at least a thousand times more facilities now than compared to ten years ago, so our performance should also be a little more consistent”.

Pace bowlers in the Test XI – yes or no?

Bangladesh went into the Test match without a single fast bowler. They had left out Mustafizur Rahman and picked three in their squad, but fielded not one of them; Sarkar, the part-time medium pacer, was in the mix, but bowled just four overs in the Test. Afghanistan, however, picked one, Yamin Ahmadzai, who got them their first wicket in the first Bangladesh innings, but was also bowled rarely.

“I said before the Test match that the pace bowlers must deserve a place in the team,” Shakib countered. “Interestingly, I was seeing their stats today, and their economy rate is 4.41. If they bowl 90 overs, they will concede 400. We are out of the game on the first day.

“If they bring it down to 2.8 or 2.9 and they have a good strike rate, we can pick them. Just check their stats from their home Tests in the recent past, and you will see what I mean.”

Nazmul, however, feels that the strategy is wrong, and pace bowlers should have been picked as he expected the Chattogram pitch to be similar to those in England during the World Cup. “First thing is, where are the pacers? We played in sporting wickets at the World Cup. Why the reversal in plans? I have to know who came up with these plans first,” he said. “They [Afghanistan] have the best spinners. So we wanted to contest them with spin. The one person who had the courage to do that, took that decision. I don’t know if it might be a case of overconfidence. I thought we were going to play on a sporting wicket.”

Quality fast bowlers have not come up the ranks, yes, but the quality of batsmanship has also gone down because of lack of practice against quality bowling, Shakib argued.

“We have to find out what is wrong with the player first. I think it is wrong to expect the same medicine to work for everyone. Whether it is because they are playing in the NCL [National Cricket League], or not because of playing in the NCL. It could be both,” he said. “It maybe so that the bowling is so easy to play in the NCL that they end up hitting four or five double-hundreds, but when they come to international cricket, they can’t score four or five runs.”

For Nazmul, though, it is the shift from the three-year-old strategy that has been the bigger problem.

“We were under a particular strategy before Steve Rhodes came. It was known that we would play against teams from the subcontinent in one kind of wicket and a different kind against the rest,” he said. “I think everyone has a lot to learn from this. I thought the likes of Mushfiqur [Rahim], Shakib, [Mahmudullah] Riyad and Mominul will score centuries. No reason not to, since their [Afghanistan’s] batsmen did.”

Interestingly, while the Bangladesh batsmen have struggled, Rahmat Shah became Afghanistan’s first Test centurion, Asghar Afghan hit back-to-back half-centuries, and debutant opener Ibrahim Zadran gave a good account of himself with innings of 21 and 87. Was it the pitch? Shakib said it was the “complete opposite” of what the Bangladesh team wanted, while the Afghanistan camp expected the track to be flat but were taken by surprise when it turned out to be bone dry. What went wrong there?