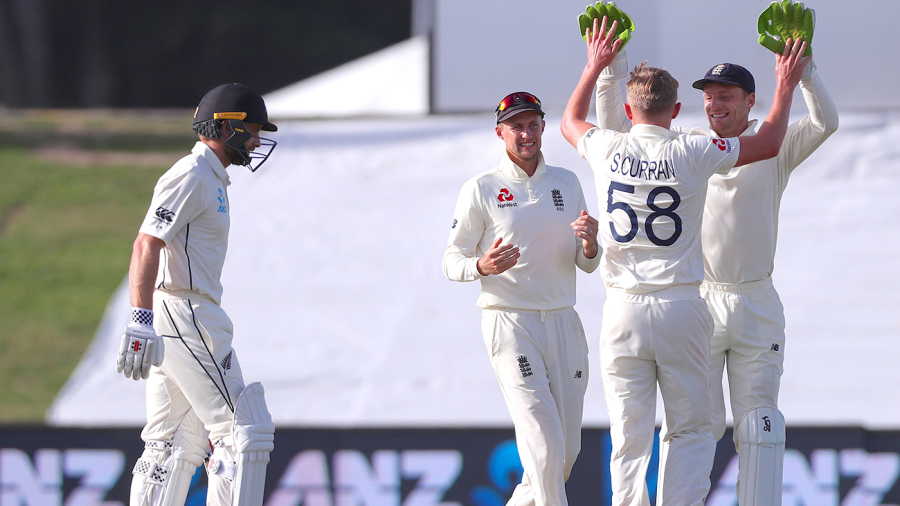 England’s bowlers struck telling blows during the afternoon and evening on day two in Mount Maunganui, as they strove to get the better of a New Zealand side that has been close to unbeatable on their own patch. Kane Williamson made a polished half-century but when he became the fourth wicket to fall, late in the evening session and with his side still more than 200 runs behind, England were in the ascendancy.

Sam Curran was the bowler to strike, his second wicket of the day, and the closing stages saw New Zealand battling to avoid further losses as Jofra Archer tested the middle of the pitch in fading light. England’s total of 353, their highest in the first innings of an away Test since Melbourne 2017-18, was underpinned by Ben Stokes‘ 91 but came accompanied by a sense of missed opportunities; however, their application in the field ensured it was New Zealand nervously casting around for a candidate to deliver a significant statement with the bat.

While New Zealand’s bowlers deserved immense credit for dragging the tourists back after the slog of day one, they were aided by England reverting to type during a morning collapse of 4 for 18 in 21 balls. Tim Southee provided the spark, extracting Stokes when he seemed hell bent on a third century in his last five Tests – though even here, with the batsman advancing malevolently to try and flay through the off side, came the hint of an unforced error.

England subsequently lost their last six wickets for the addition of 76 runs, Southee and Neil Wagner claiming five of them. New Zealand might have wrapped up the innings before lunch, only for Jos Buttler to counterpunch effectively during a ninth-wicket rearguard with Jack Leach.

Still, with Stokes joining Joe Denly and Rory Burns in failing to convert half-centuries and England falling short of the 400-run mark that had been touted as par on a docile Bay Oval pitch, the stage was apparently set for New Zealand’s more-accomplished accumulators to show the visiting side how it’s done. That was not quite how things panned out, as two teams that have been impossible to separate in the white-ball formats this year found themselves in another gripping tussle.

The key wicket, indisputably, was that of New Zealand’s captain, Williamson. Although England managed to remove both openers, and Ross Taylor eventually lost patience against a sustained bouncer attack from Archer and Stokes, the sight of Williamson ticking along to an 84-ball half-century would have reassured home supporters that all was well.

However, the very next ball, delivered by Curran, sent a ripple around the ground and forced wholesale re-evaluations of what might be expected from the rest of this Test. Williamson was left reeling by unexpected bounce from a length – clear indication of some unforeseen variability in the surface – as the ball ballooned off his glove and Stokes plunged forward to gratefully take the catch at second slip.

It was Curran, too, who made the opening incision after New Zealand had begun their reply midway through the afternoon session, winning an lbw decision against Tom Latham in his first over; replays suggested an inside edge but the batsman chose not to review.

Latham’s opening partner, Jeet Raval, rarely looked convincing during his time at the crease, eventually falling to his fourth risky heavy at Leach after a 54-run stand with Williamson. Taylor then top-edged Stokes to deep midwicket before the demise of Williamson left New Zealand looking expectantly to Henry Nicholls, a man who has averaged more than 60 since the start of 2018. Nicholls was shaken by a hefty thump to the helmet from Archer in the penultimate over of the day, but was cleared to continue after an examination from the physio.

Things had looked much brighter for New Zealand after a productive start to the day. Stokes and Ollie Pope extended their overnight partnership to 74 before Southee intervened with three wickets in 11 balls. Although initially held back, once Southee had pried an opening he harnessed the conditions expertly to rip through England’s middle order.

Stokes picked up regular boundaries as he moved into the 90s, only for Taylor to brilliantly atone for dropping him on day one. With New Zealand having shifted their cordon wide, Taylor had to react instinctively to a chance flying through regulation first slip but clung on one-handed high to his right.

Operating in the high 120s kph but showing just why New Zealand’s attack is so adept when there is a hint of swing on offer, Southee struck twice more in his next over. Pope, who successfully reviewed an lbw decision in the third over of the morning, played some eye-catching shots to move past his previous Test best of 28, made on debut against India in 2018, but was lured into flashing at a delivery that left him enough to clip the edge through to BJ Watling.

Curran was then bamboozled by a full inswinger, opting to review despite ball-tracking showing that the delivery would have crashed into middle and leg stumps. Archer negotiated the hat-trick ball uncertainly, and then fell in the following over as Trent Boult found his outside edge. From the relative comfort of 277 for 4, England had stumbled into trouble.

With Leach nearly running out Buttler off the first ball he faced, England were in serious danger of folding. But Buttler hinted at his destructive capabilities when casually lofting Southee back down the ground, then launching Boult high over long-off for six in the last over before lunch. His stand with Leach had yielded 52 valuable runs when Buttler picked out Mitchell Santner at deep point – perhaps partly deceived by the fact Santner had left the field to sign autographs and only hurdled the boundary boards to return to the field of play as Wagner ran in to deliver the ball.