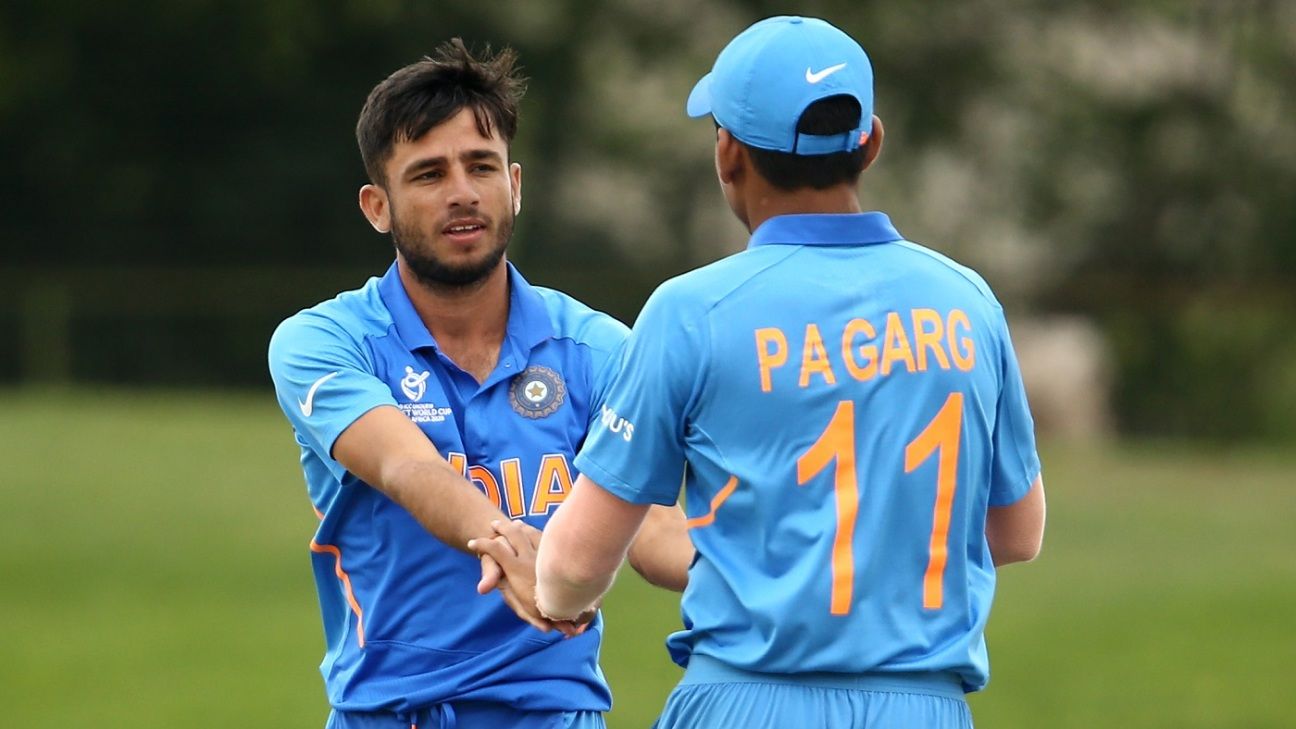 India were challenged for the first time in the tournament but they escaped unscathed. Their opening pair of Yashasvi Jaiswal and Divyaansh Saxena set the game up with unbeate half-centuries amid the rain breaks. Then their spin twins Ravi Bishnoi and Atharva Ankolekar came into their own after a brief New Zealand challenge to pick up seven wickets between them. India won by 44 runs via the DLS method to top Group A and set up a quarter-final clash against Australia on January 28.

Asked to bat, India were on course for a big first-innings total at 104 for 0 in 21 overs. But a lightning warning and subsequent rain reduced the game to 23-over-a-side. India returned to add just 11 off their final two overs to finish on 115. That they had 10 wickets in hand went in their favour, with New Zealand’s target adjusted to 192. Saxena was the aggressor, hitting six fours in his 62-ball 52 while Jaiswal made 57 in 77 balls.

In their chase, New Zealand were flying after their openers Rhys Mariu and Ollie White struck 51 runs in five overs. India’s left-arm pacer Akash Singh felt the brunt of Mariu’s big hitting, conceding 16 in his first over.

India captain Priyam Garg’s introduction of spin worked right away, however. Legspinner Bishnoi had left-handed White stumped by Dhruv Jurel to break a threatening stand. That did not slow New Zealand down though, as their No. 3 Fergus Lellman smashed left-arm spinner Ankolekar for two sixes to keep New Zealand’s run-rate over 10.

Playing in his first game of the tournament, Ankolekar perhaps had some nerves. His first delivery was a short ball that was pulled over the leg side. Then when he bowled full, he was deposited over long-on. At the end of seven overs, New Zealand were 74 for 1, with the required run-rate below 7.50.

But Ankolekar got into the game in his second over by dismissing Mariu for 42, thereby missing out on a third straight fifty. In his third over, Ankolekar bowled Lellman, who looked to slog over the leg side. By the time Ankolekar took his third wicket, in his fifth over, New Zealand were 114 for 4 in the 15th over. Their scoring rate had significantly slowed down.

Garg soon brought Bishnoi back for the 18th over, and he struck thrice in one over to break New Zealand’s back. Kartik Tyagi, the right-arm pacer, then bowled a yorker to clean up Adithya Ashok’s stumps after which Garg’s run out of No. 10 Hancock ended new Zealand’s innings.

“I thought the boys handled the pressure well,” Garg said at the post-match press conference. “We expected this to be a pressure game. We didn’t get frustrated, because we were mentally prepared for rain in South Africa. The discussion among the team was being mentally switched on.”

India coach Paras Mhambrey concurred while praising Bishnoi’s effort. He also laid out what makes India stronger than the rest.

“We were happy that we were tested today,” Mhambrey said. “In that sense, this win is important. “Bishnoi’s been fabulous. Contributed in every game. When he came in the Powerplay with the batsmen going hard, it was a difficult situation, and he got us back in the game. He’s very skillful, played a lot of cricket and he’s maturing every game.”

“There will be nerves going ahead, but the advantage that we have is that these boys have played a lot of first-class cricket so the pressure isn’t new to them.”

As for New Zealand, theoretically, they need to wait for Saturday’s game between Sri Lanka and Japan to know whether they qualify for the knockouts, but they’re likely to play West Indies in the January 29 quarterfinal at Benoni. Japan’s net-run rate of -7.87 will let New Zealand rest easy, while Sri Lanka – on zero points – cannot catch up with them.

Meanwhile in Potchefstroom, Bangladesh and Pakistan were forced to split points after a washout. Both sides ended the group stage unbeaten, but Bangladesh finished higher on account of a better net-run-rate. This meant Bangladesh will play South Africa in the quarter-finals, while Pakistan will take on Group D toppers Afghanistan on January 31.

Only 25 out of the 37 overs were possible as there were a number of interruptions. Pakistan had the better of the exchanges in whatever little play was possible, as they left Bangladesh tottering on 106 for 9. The fast bowling duo of Mohammad Amir Khan (four wickets) and Abbas Afridi (three) didn’t give Bangladesh any leeway. Only opener Tanzid Hasan threw in some sort of resistance in making 34.