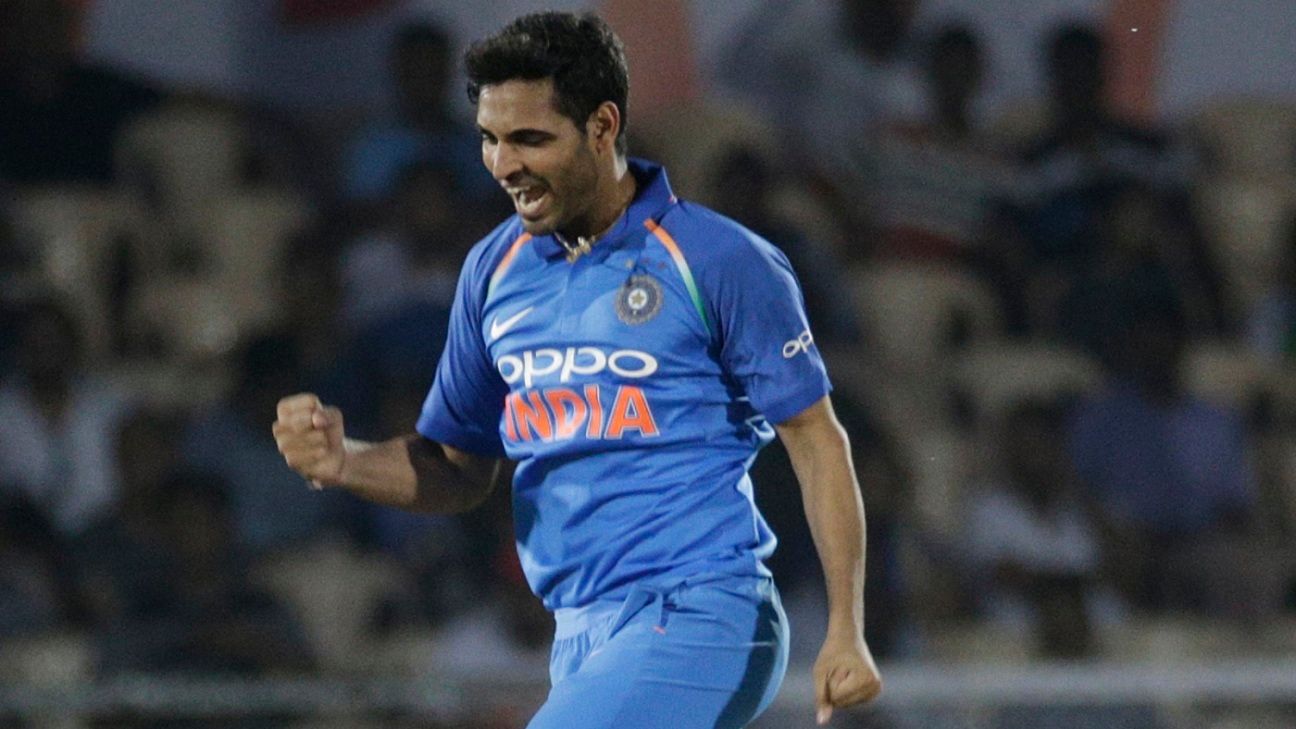 Not bowling for a long time in international cricket in 2018 impacted his bowling rhythm, India’s Bhuvneshwar Kumar has stated ahead of the second ODI against Australia in Adelaide on Tuesday. Bhuvneshwar largely played limited-overs matches in 2018 when India traveled for the three toughest overseas tours for any India side – to South Africa, England and Australia – largely because he was battling niggles and trying to get his rhythm back.

Bhuvneshwar hasn’t featured in a Test since playing in Johannesburg, in which he was Player of the Match, in January last year because he had to sit out of the Test series in England, where he was expected to play a big role in swinging conditions, with a back injury he picked up in the ODI series in England. He returned two months later for the Asia Cup in the UAE, and has only played ODIs and T20Is since then, against West Indies at home and in Australia for the ongoing tour.

“I was going through niggles at that time [in England], and when you have a niggle you can’t be a 100%. Since then and now, I have trained a lot, especially during the one month of the Test series. That is the reason I am back to [bowling at] 130-135kph, whatever the thing is. The main thing is I’m niggle-free right now. That’s the main thing for me.”

On Saturday, Bhuvneshwar took the field after over a month since playing the third T20I, which was also in Sydney, to finish with 2 for 66. He struck with his eighth delivery by removing captain Aaron Finch with an inswinger, which also fetched him his 100th ODI wicket. Later, he dismissed top-scorer Peter Handscomb in his third spell, one delivery after the batsman was dropped at the long-leg boundary by Ambati Rayudu at the start of the 48th over.

Even though Bhuvneshwar was part of the Test squad in Australia, India relied on the pace battery comprising Jasprit Bumrah, Ishant Sharma and Mohammed Shami to win the series 2-1. Bhuvneshwar revealed that he was not a 100% fit during the four-Test series.

“See, I was fit but I couldn’t say that I was a 100% because in Test matches, it’s a five-day match, so I really didn’t know I would be able to go through that thing. What was good was we had bowlers who could play at that time, and I got time to be 100% fit again. I wasn’t really sure that time.

“In the nets I wasn’t planning or preparing to bowl in the ODIs. I was preparing like I have to play in any of the Tests. I was preparing in that manner. There wasn’t anything specific that I could do. But it was just normal bowling and increasing the number of overs. If I was bowling four overs [to start with], then go to six, then eight, then 10. The key thing for me is to be niggle-free, and be in bowling rhythm.”

To switch to training for the ODIs, Bhuvneshwar was seen practising by placing a shoe on the pitch for accurate lengths and trying the yorkers, a weapon he uses often with the old ball in the death overs.

Apart from yorkers, Bhuvneshwar also possesses the knuckle ball which he uses once the ball gets older and the swing wears off. Apart from Bumrah, who has been rested for the ongoing series, Bhuvneshwar is India’s key bowler for both the opening overs and the death overs, with the World Cup under five months away.

“The skills needed are totally different,” Bhuvneshwar said. “You are trying to swing the new ball and take wickets. With the old ball, you are looking to bowl yorkers or slower balls. But they are both difficult. When you are bowling with a new ball, there are only two fielders outside the circle. With the old ball, batsmen don’t care how many guys are outside the circle. [The] skills are also different.”