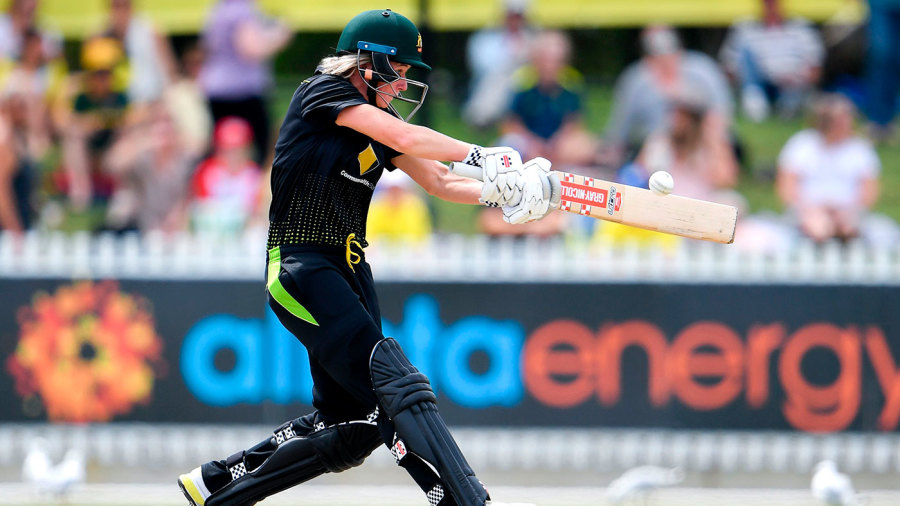 For a few tense minutes, India appeared to have the triangular series final in their keeping, as Smriti Mandhana and Harmanpreet Kaur pulled their team to within 41 runs of victory with 35 balls remaining and all of seven wickets in hand.

Australia, though, summoned the reserves of composure and skills that have served them so well over recent years, pressuring the Indians into error and conjuring a collapse of 7 for 29 to emerge winners by 11 runs and strike a vital psychological blow ahead of the Twenty20 World Cup later this month. Their heroes were Jess Jonassen, with eye-popping figures of 5 for 12, Beth Mooney‘s anchor innings of 71 not-out, and a critical late-innings contribution by Rachael Haynes.

Together they allowed the Australians to finish victors in a tournament where they had their share of scrapes, losing two games out of three and not qualifying for the final until the very last opportunity, but gradually finding pockets of form and confidence that will be vital heading into a global tournament upon which much has been staked. Not least the expectation that Meg Lanning’s team will play in the final at the MCG on March 8, International Women’s Day, and duly attract a world record crowd for a women’s sporting event.

More woes for Healy in an unsteady start

If Monday night’s Australian Cricket Awards provided a reminder of why Alyssa Healy has been one of the game’s dominant players over the past few years as she took out both the ODI and T20I Player of the Year trophies, they were unable to pull her out of a recent slump that now comprises five consecutive innings without reaching double figures. Maintaining her role at the top of the order, Healy had little trouble swatting Deepti Sharma’s first ball to the backward square leg boundary. But a fuller, faster delivery wide of the off stump soon drew a cut shot and an edge into the wicketkeeper’s gloves to send Healy on her way yet again.

Australia are showing no signs of diverging from long-term plans, though, and Ashleigh Gardner looked capable of reprising her 93 in Saturday’s fixture while Mooney built steadily. However a skier by Gardner from Arundhati Reddy’s bowling ended her stay at 26, as the innings spluttered along without any great degree of confidence. Lanning’s efforts to steady the ship were aided by a piece of outrageous fortune, when she looked certain to be run out on 18 by Shikha Pandey’s throw from mid-off, only for the ball to deflect off the broadcast box for the stump microphone and miss. The deflection also allowed Lanning a second run, though she was only to get to 26 before toeing a sweep shot to short fine leg.

Well as Mooney played, maintaining a steady presence throughout the innings as India’s combination of pace and spin applied an effective clamp to the scoring rate, the Australians were desperate for a late shot of big hitting, something they had been unable to find in the closing overs of the two sides’ previous meeting. Ellyse Perry, the 2019 Belinda Clark Medal winner, tried and failed to provide it, caught on the boundary at long-on for a duck, and at 4 for 114 with three overs remaining, a decidedly mediocre total looked likely.

An experimental promotion for Annabel Sutherland did not work as she was smartly stumped off the bowling of Sharma for seven, and it took the entry of the demoted Haynes to provide the require acceleration. Like Healy, Haynes has had a difficult time with the bat lately, but on Wednesday she was able to find the boundary three times in seven balls, starting with a first-ball sweep to the fine-leg rope, and then delivering a powerful six over midwicket off Rajeshwari Gayakwad. The tournament hosts were duly able to pile up 41 from the final three overs and 19 from the last, giving them a much more defendable tally than had seemed likely.

Pace pins down India, for a while

In choosing no fewer than five pace-bowling options for the final, the Australians did not leave much to the imagination in terms of their angle of attack, and for a while it looked to have paid off. Shafali Verma could only make it as far as 10 before swinging at Tayla Vlaeminck and lobbing a catch to cover, Richa Ghosh, the debutant who came in for Harleen Deol, offered Sutherland her first international wicket, and then Jemimah Rodrigues was bounced out by Vlaeminck, well caught at fine leg.

At 3 for 65, the Australians were well in control, and Perry ratcheted up the pressure further with a tight second over costing just three. But, in Vlaeminck’s final over, it was clear that Mandhana had found her range, and three boundaries were clumped in the space of five balls. Sutherland’s return to the bowling crease brought more expense, in between a couple of difficult caught-and-bowled chances as Mandhana flayed the ball back at her, and when Healy conceded five wides off Gardner, quickly followed by Nicola Carey letting a four through her legs, the hosts were looking extremely shaky.

Carey turns it around for Australia

Having not faced a ball with the bat, Carey bowled one over for 13, and conceded a critical boundary that she should have saved; the allrounder could have been forgiven for trying to locate a place to hide at Junction Oval. T20, though, can be a difficult format for fielders to escape from, and Carey was duly presented with a well-struck pull shot from Mandhana the very next ball. The chance was low, the pressure was high, and the Australians needed a moment on which to turn around what had to this point been a halting display.

Holding her shape and cupping her hands perfectly around the ball, Carey completed an outstanding catch in the circumstances, seeing off Mandhana and making a critical change to proceedings. There was to be another twist, too, by way of tactics, as Jonassen delivered the vital follow-up punches with her tidy left-arm spin. India’s captain, Harmanpreet Kaur, was pinned lbw, even starting to walk before the umpire raised his finger, and then Reddy’s top edge was well caught by Healy, running back with the flight. Suddenly a game that India looked to have in control had tilted decisively Australia’s way, and the closing overs saw the look of a team rediscovering the confidence of the world’s best side: in the nick of time, too.