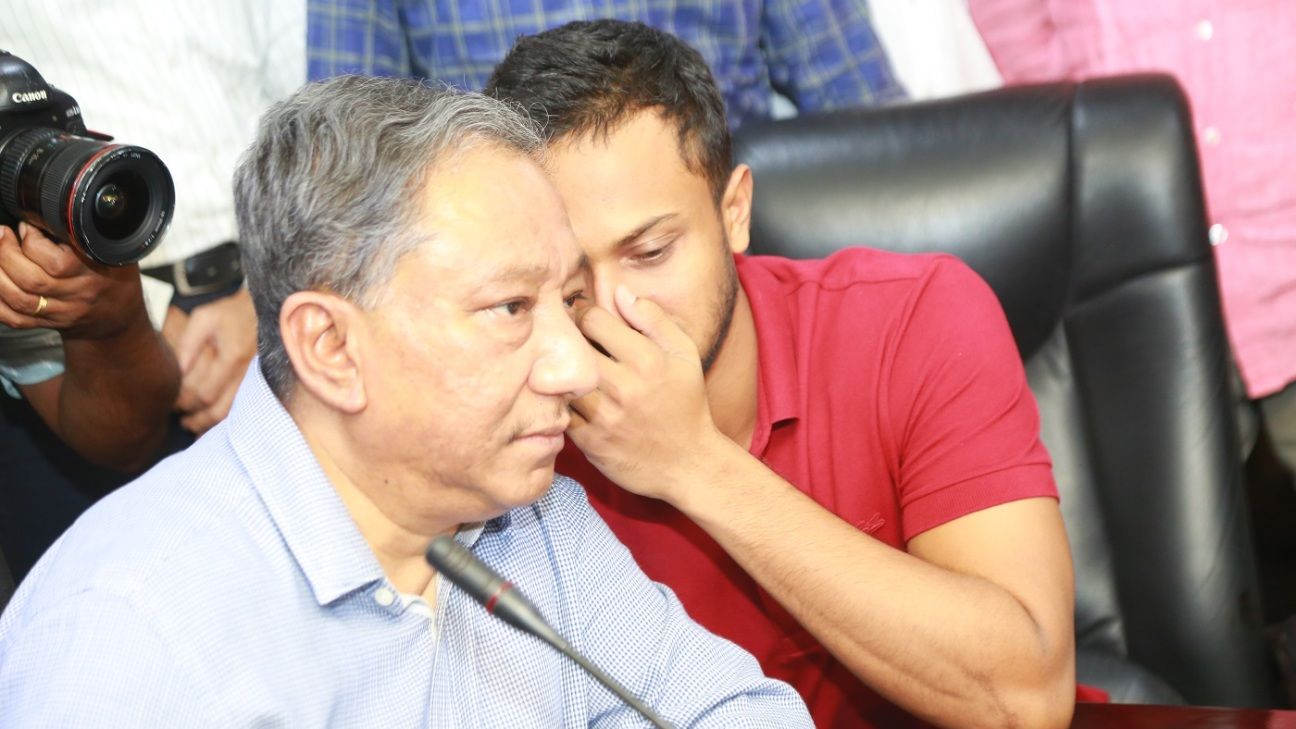 Bangladesh Cricket Board president Nazmul Hassan‘s aggressive attitude during the Wednesday meeting between the board officials and the striking cricketers, especially his takedown of allrounder Mehidy Hasan, apparently threw the players off to start with, one of them even saying that the incident “rattled” them.

One of the puzzling sidelights of the meeting came in the form of Obeid Nizam, CEO of Bangladesh Premier League side Dhaka Dynamites, attending the meeting.

Nizam is neither a BCB director or a BCB employee, and raised questions of conflict of interest, as the franchise is owned by Beximco, the company where Hassan and board directors Ismail Haider Mallick and Khaled Mahmud are employed.

It also left many of the board directors irate, one of them saying it was “a slap to our face”.

Nizam was the board president’s advisor between 2013 and 2017, but it isn’t clear if he continues to hold a similar role.

“Miraz [Mehidy], what have I not done for you, and you didn’t pick up my phone call? From today onwards, I will delete your number from my phone,” Hassan raged at the start of the meeting, and the young allrounder cowered, sinking in his seat.

In many ways, the start of the meeting was a continuation of the previous day’s press conference – Hassan targeting a player for taking personal favours from him and then joining the strike; that soured the mood of the group that had arrived in the evening hoping for an amicable solution.

It was an extraordinary way to begin a discussion that had so much riding on it for everyone concerned. On the one side were the players, who had just agreed among themselves that they would face their paymasters and thrash the issues out. On the other were the BCB officials, who knew that if they couldn’t provide a solution, it would have deep repercussions.

But after Hassan’s counter-attacking stance, the players said they were thrown off kilter. Many of the players, who were active in discussions in the previous 48 hours, kept mum, saying nothing after Hassan slammed Mehidy.

“We were told that all of our demands were met, but there was no actual detail. This was quite confusing, as we wanted to know exactly by how much, for example, the NCL [National Cricket League] match fees will be increased. There was no clear direction”

“The Miraz thing rattled us,” one player told ESPNcricinfo on condition of anonymity. “The way the meeting began, it didn’t leave us with much to say. Shakib [Al Hasan] managed to put forth our points but the rest of us simply didn’t have the mentality to bargain.

“We were told that all of our demands were met, but there was no actual detail. This was quite confusing, as we wanted to know exactly by how much, for example, the NCL [National Cricket League] match fees will be increased. There was no clear direction.” But Hassan, who later admitted in a press conference that he had lost his temper, then clarified the BCB’s stance on each demand.

The BCB stayed out of discussions about the fresh elections of the Cricketers Welfare Association of Bangladesh [CWAB], but association president Naimur Rahman agreed to hold elections soon. The players said that they wanted a representative from the current players so that they could regularly speak to the board about their issues. This representative is going to be a pivotal point for the rest of their demands, as the BCB committed that once this person is elected, they will respect the position.

About the Dhaka Premier League’s return to a free-market system for player transfers, Hassan asked what would happen if the clubs don’t pay the players in time. The players said they would handle it.

Then came the longest discussion, on the demand for first-class cricketers getting higher match fees, daily and travel allowances. Some domestic stalwarts like Mohammad Sharif, Shahriar Nafees, Nabil Samad and Enamul Haque jnr put up the players’ point of view, but after the back and forth, they weren’t fully certain of the outcome. The new fee structure wasn’t communicated to the players, but Hassan did later say that it would be firmed up within “two or three days”.

Hassan also agreed to the demand of infrastructural development in cricket centres across the country in one consolidated go, and not one by one as was previously planned by the board.

There was also discussion about an extra one-day and T20 tournament in the domestic season, which the BCB said they would try to fit in later this season.

While many of the players left the meeting unconvinced, aggrieved and confused, there was also a sense of hope.

“The fact that we could all come together under one cause was what shook the BCB,” one cricketer said. “I think they couldn’t believe that more cricketers joined us on the third day of our strike. They must have expected fewer cricketers to be with the movement.

“So we have to remain strong together, and ensure that we get our demands implemented.”

The players now feel proper follow-ups are required on their part, to ensure that the BCB keeps its side of the bargain. They believe that if the CWAB elections are held soon, it would be a major breakthrough, as it would give them a stronger say in every matter.

They remain hopeful that despite all the personal attacks, Bangladesh cricket will see a new direction. At least a start has been made, but the players might have to monitor the progress (or lack of it) themselves.