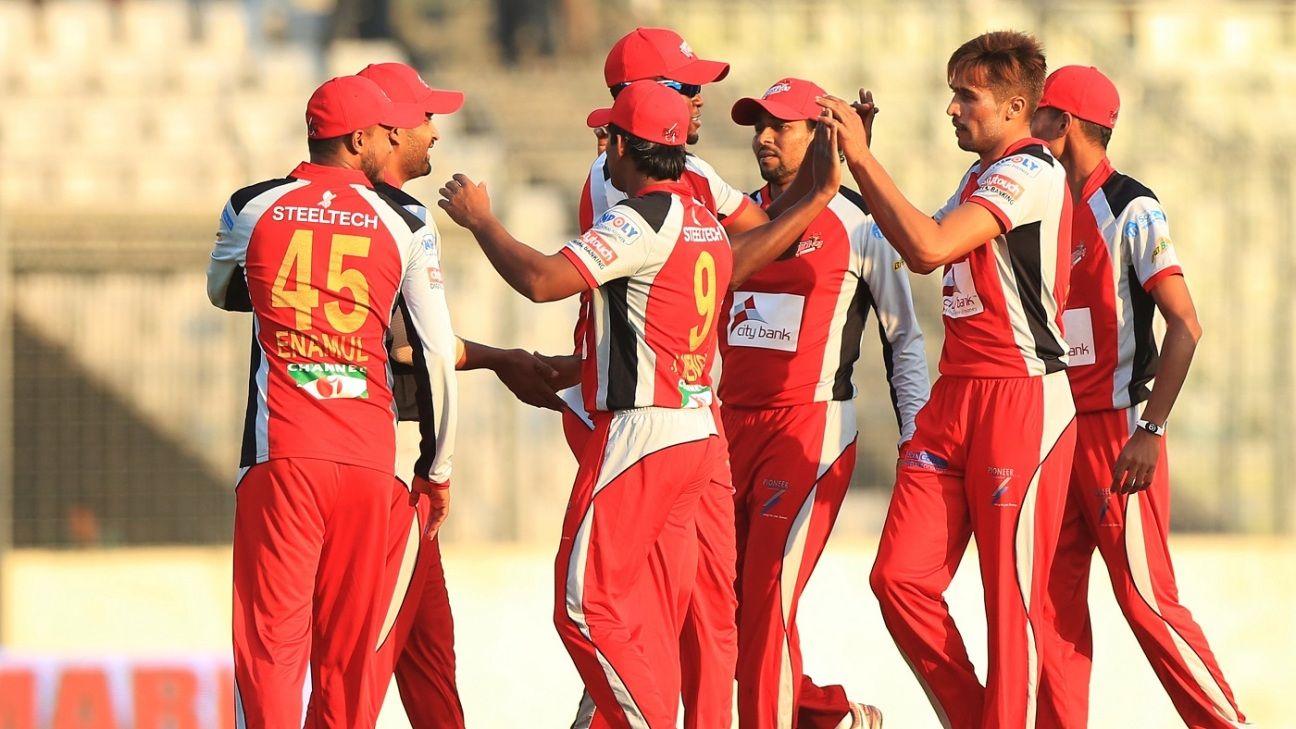 The two Bangladesh Premier League (BPL) teams that are being managed by the Bangladesh Cricket Board (BCB) in the upcoming edition of the tournament have failed to comply with the board’s own diktat, that all squads must have an overseas quick who bowls above 140kph and a legspinner, who has to bowl four overs in each game.

Rangpur Rangers don’t have that make of fast bowler, and their legspinner could well be picked for the Under-19 World Cup, while Comilla Warriors are still trying to get themselves a fast bowler, and aren’t even looking for a full-fledged legspinner.

Minhajul Abedin, Bangladesh’s chief selector who has been appointed Comilla’s technical advisor, disagreed, propping up Afghanistan fingerspinner Mujeeb Ur Rahman, who bowls a mixed bag of deliveries including a right-hander’s legbreak, as their legspinner.

“We have picked Mujeeb, who is a world-class spinner, which fulfills the requirement,” Minjahul told ESPNcricinfo. “He bowls both legspin and offspin, and he is a great bowler. So that’s not going to be a problem.”

On Comilla’s radar is Oshane Thomas, who they are hoping to bring on board, but they are yet to get NOCs for many of the overseas players they have signed up.

“Kusal Perera is not getting NOC. Dasun Shanaka and [Bhanuka] Rajapakse are yet to get theirs. We are in touch with Kyle Jarvis, who has a great record in Bangladesh while playing for Zimbabwe, but he too hasn’t been given the NOC,” Minhajul said. “We are also in talks with Oshane Thomas. We are hoping that we get enough overseas players, otherwise we have Mujeeb and [Dawid] Malan, who will play the first match.”

As for Rangpur, Akram Khan, their team director who is also BCB’s cricket operations chairman, argued that there’s no compulsion to play a legspinner but, in any case, they have Rishad Hossain, the 17-year-old who has done well in first-class cricket recently. But Rishad could be picked in the Under-19 side, in which case he would be unavailable from early January.

“It is not mandatory to play a legspinner, but we have some really good bowlers like Mustafiz [Mustafizur Rahman], Taskin [Ahmed], Mohammad Nabi and Arafat Sunny, as well as Lewis Gregory, who is a pace-bowling allrounder,” Akram said.

On October 11, BCB director Mahbubul Anam had explained that “BCB wants this BPL [being run by the board as opposed to being a franchise based event] to be about improving Bangladesh’s cricketers in T20s, so we want to make sure that our batsmen and bowlers get enough opportunities [against quicks and legspinners].”

Not long after that, on October 17, two coaches in the National Cricket League – Rangpur Division’s Masud Parvez Razan and Dhaka Division’s Jahangir Alam – had been dismissed by the BCB for not picking legspinners, though available, in their playing XIs.

As for the BPL, it’s not just Comilla and Rangpur. Two other teams have also failed to fulfill the criteria.

Sylhet Thunders picked Sheldon Cottrell after the draft, but he has since informed the team of his unavailability due to West Indies commitments. Sylhet then picked veteran Pakistan bowler Mohammad Sami. Chattogram Challengers did sign up legspinner Jubair Hossain, but not a 140-plus fast bowler.

Dhaka Platoon, Khulna Tigers and Rajshahi Royals are the only teams to have ticked all the boxes. The tournament kicks off on December 11 with fixtures between Chattogram and Sylhet, and Comilla and Rangpur.