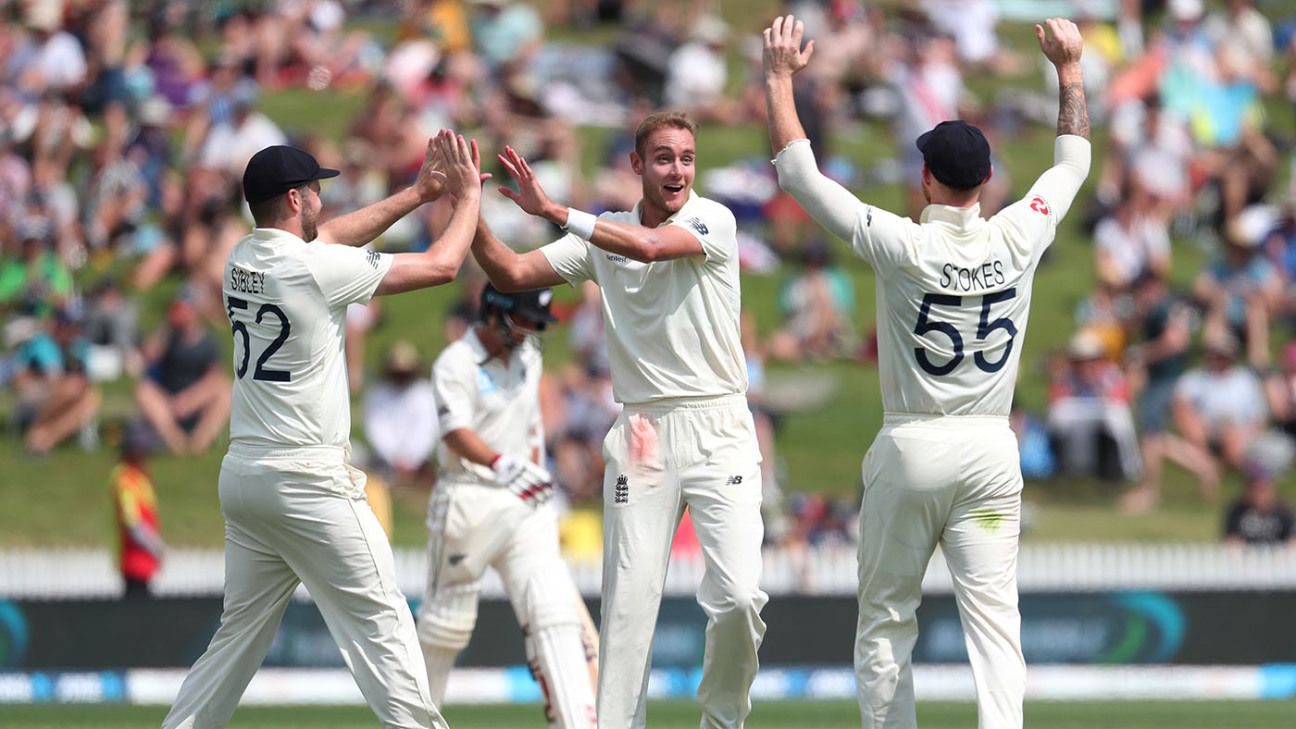 Stuart Broad has challenged England’s batsmen to bat for 150 overs and “set up the game” over the next couple of days in Hamilton.

Having been frustrated for hundreds of overs by New Zealand’s batsmen in the series to date, Broad urged his team-mates to show similar determination if England are to secure a series-equalling victory. And while it wouldn’t quite be true to suggest that Broad intimated the bowlers had done their job, now let’s see the batsmen do theirs, it wouldn’t be entirely untrue, either.

England’s bowlers again performed with heart and stamina in restricting New Zealand to 375 on a docile pitch in Hamilton. But England’s batsmen were soon struggling in reply and were probably fortunate to reach the close with just two wickets down. Rory Burns was dropped twice.

That left Broad calling on his batting colleagues to seize the opportunity to record a substantial total over the next day or two. And he called on Burns, in particular, to make a telling contribution.

“Someone like Rory Burns is our key batsman because he’s a player that has his areas that he scores in. If he can stay in that bubble and not chase balls outside off stump, he’s someone who could go and get 200. We need someone to go and get a big hundred for us to win this game and we’ve got the players to do it. If a batsman really applies himself on these pitches and doesn’t play loose shots and wants to just score in their area, they can be a real handful.”

While Broad’s words were, no doubt, meant as encouragement, he could be forgiven if there was an element of frustration behind them, too. For Broad was one of the bowlers sentenced to 201 overs in the field in New Zealand’s only innings in Mount Maunganui after England’s batsmen squandered the opportunity to make first use of a benign surface. At one point on day two, with the score 277 for 4, it looked as if England might make a game-defining total, but a first innings of 353 turned out to be deeply inadequate.

Equally his highlighting of Burns’ role is intriguing. Burns was originally selected as something of an old-fashioned, solid opening batsman. But in the last hour of play on Saturday, he played a couple of oddly aggressive strokes and was fortunate to survive. Broad, it seems, was gently trying to remind him of his strengths and the team’s requirements.

“We had an opportunity at Mount Maunganui on the morning of day two to heap all the pressure on New Zealand for the rest of the game,” Broad said. “And we didn’t manage to take that. But if we had gone and scored 450-500 then they would have been batting under pressure.

“Equally, when they were 200 for 5 in their first innings, we had another opportunity to take pressure off ourselves and apply it to New Zealand. But Mitchell Santner and BJ Watling batted fantastically well. We gave the pressure back to them and lumped it on ourselves at the end of the fourth day.

“I thought it might change the balance of the trigger movement for the batsman. It caught him by surprise a bit”

“Here we’re not batting with a scoreboard of 500. They made 375. So, I think our pressure is reduced slightly and we just go and play. If you’re a batsman, you’d want to bat out there, wouldn’t you? If you were good at batting, you’d fancy that.

“For us to win this game, we’ll need a batter to get 150-plus and someone else to get a hundred and leave ourselves a day to bowl them out on day five. I think that’s how New Zealand won the last Test they played here: they got 700 for six. Arguably, they’re probably 300 under par.

“If we bat through the whole of day three and go past New Zealand, we can apply some pressure on them in the second innings. If we don’t go and get 400, we can’t. The opportunity is there to bat big and bat big once.”

While some will look at the scoreboard from these two Tests and suggest the bowlers might do well to worry about their own jobs rather than give advice to the batsmen, Broad has a point. The pitches in both Tests have been painfully slow and, armed with a Kookaburra ball that has offered little after 20 or so overs, England’s bowlers have been demonstrated impressive control and discipline. “They make your work hard for the wickets here,” Broad said.

Broad finished with 4 for 73 here. While he dismissed Jeet Raval, caught at slip in fairly conventional fashion on day one, and then ended Tom Latham’s excellent innings when the batsman left a straight one, he was forced to think outside the box for his other two victims.

Watling, for example, was deceived when Broad deliberately bowled one from at least a foot behind the popping crease in a bid to put the batsman’s trigger movements out of sync.

“I tried it once at The Oval, where Steve Smith was causing us a lot of problems,” Broad said. “Because he triggered so much, I thought if I bowl it a yard before the line, it might surprise him and catch him off guard. But I hadn’t practised it all.

“So leading into tea here, I thought I’d nothing to lose. I thought it might change the balance of the trigger movement for the batsman. It caught him by surprise a bit. I don’t know if it did him for lack of pace, but you take anything out here.

“I’ve tried to vary my pace and I’ve tried to use the short ball at times. I’ve got a lot of respect for how Tim Southee, Neil Wagner and Trent Boult have gone about their business over a long period of time. I looked at Tim Southee at Mount Maunganui and he changed his position on the crease a huge amount. Wagner bowls a bit of everything. The mindset is a bit different here. I feel I’m learning a bit as well.”

Now it’s up to England’s batsmen to show they can pick up new tricks, too. If their first innings doesn’t extend into day four, it’s hard to see how they can claw their way back into this series.