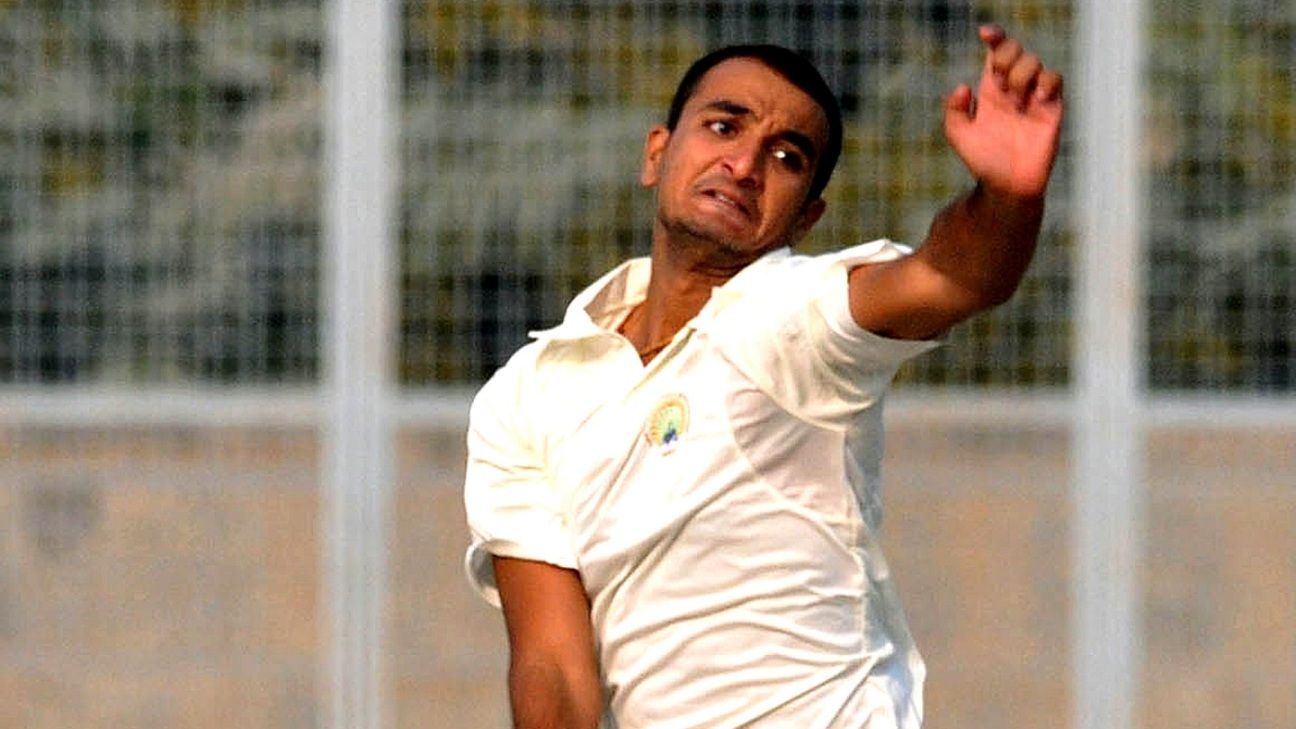 Baroda and Karnataka surged to the top of the Super League groups A and B, winning their Syed Mushtaq Ali Trophy matches on Friday. While Baroda held off Delhi by a solitary run, Karnataka beat Jharkhand by 13 runs in a game they looked like they would win at a canter at one stage. The victories gave them both eight points each from two matches.

Rajasthan and Jharkhand, who have both had a close defeat each in high-scoring games, now find themselves with two defeats in as many Super League games, making a spot in the semi-finals difficult.

Like on Thursday, there were IPL scouts from at least four franchises in attendance for the matches, making performances in the Super League particularly crucial given the IPL auction that is scheduled for December 19.

A combined effort by the Delhi bowlers kept Baroda to 151 for 6. However, Delhi’s chase stuttered and finished on 150 for 9. Babashafi Pathan, the right-arm medium-pacer, took 3 for 24 for Baroda, while Kunwar Bidhuri fought a lone battle for Delhi.

Bhiduri, handed a game due to Shikhar Dhawan’s injury, had a sparkling T20 debut, hitting 68 off 51 balls at the top of the order. However, he lacked support from the rest of the Delhi batsmen. He was ninth out at the start of the 20th over. Delhi needed 19 to win from the remaining five balls and though Suboth Bhati swung his bat during an unbeaten 20 off 8 balls, Delhi could make only 17 runs.

Baroda didn’t have any batsman making a standout innings, though Aditya Waghmode continued his good form, top-scoring with 36 off 31 while opening. Only Deepak Hooda (26 off 19) among the other batsmen crossed 20, though useful contributions right through meant Baroda got to a competitive – and eventually winning – total.

Tamil Nadu put behind a comprehensive defeat to Karnataka to hand the other tournament favourites – Mumbai – a resounding loss, by seven wickets with 6.1 overs to spare. Left-arm spinner Shams Mulani had a remarkable day, but the rest of the Mumbai team crumbled.

Tamil Nadu’s bowlers ensured Mumbai could get only 121 for 9, despite Mulani hitting 73 off 52 after being promoted to No. 4. R Sai Kishore continued his good run with figures of 3 for 18 in four overs, while M Siddharth took 4 for 16. Prithvi Shaw made 30 off 19 at the top of the order, but no other Mumbai player got into double-figures.

Tamil Nadu sent in Shahrukh Khan to partner Hari Nishanth at the top of the order, and the duo gave the team a rapid start. Shahrukh fell in the fourth over, bowled by Mulani, with B Aparajith following him back two balls later. However, Nishanth, who didn’t have a good outing against Karnataka, came to the fore in style, smashing 73* off 44 balls.

Mulani took all three wickets to fall – Dinesh Karthik being the third – to complete a fabulous all-round day with figures of 3 for 26 in four overs, but Vijay Shankar ensured he stayed alongside Nishanth as victory was raised in just 13.5 overs.

Put in to bat, Karnataka rocketed off the blocks, before losing their way in the second half of their innings. Their fantastic start nonetheless ensured a sizeable 189 for 6 on the board, and though Jharkhand fought gamely, the required rate was always a touch above what they looked like achieving, eventually finishing on 176 for 5.

Karnataka’s start was driven by Devdutt Padikkal – in many ways the batsman of the tournament so far – who raced to 63 off 30 balls in an opening stand that brought 114 in 9.3 overs. His opening partner KL Rahul was more sedate in comparison, while Manish Pandey came in and picked up where Padikkal had left off. However, both men fell shortly thereafter, though at 130 for 3 in 11 overs, Karnataka were still looking at a total well in excess of 200. However, with their three main batsmen gone, the rest of the line-up struggled and could only score at around a run a ball thereon. Left-arm spinner Sonu Singh did most of the damage, with 3 for 28 in four overs. He took out both Rahul and Pandey, and added the wicket of Karun Nair too.

Jharkhand’s reply was driven by Virat Singh‘s 76* off 44 from No.3, but the batsmen around him couldn’t keep up with the required rate. They needed 87 runs in the last six overs, which is when Virat and Sumit Kumar (23 off 16) cut loose, but though they scored at more than two runs per ball, the eventual target proved too steep.

Tight bowling by Haryana gave them a four-wicket victory over Rajasthan with 4.4 overs remaining, with Harshal Patel putting in an all-round show once again.

Harshal, who has been opening the batting in this tournament, first took 1 for 19 in his four overs as Rajasthan were restricted to 123 for 8. Ankit Lamba top-scored with 38, but took 41 balls, and only Chandrapal Singh (25* off 14) crossed 20 among other batsmen. Rahul Tewatia, recently traded from Delhi Capitals to Rajasthan Royals, was the most successful bowler, with 3 for 18 in four overs.

Interestingly, Haryana opened with two leggies in Yuzvendra Chahal and Amit Mishra, while Tewatia – another leggie – was the first change bowler.

Harshal led Haryana’s reply, smacking 41 off 25 at the top of the order to be the highest score of the match. Haryana didn’t have too many others contributing, but given the small target, they didn’t need to.