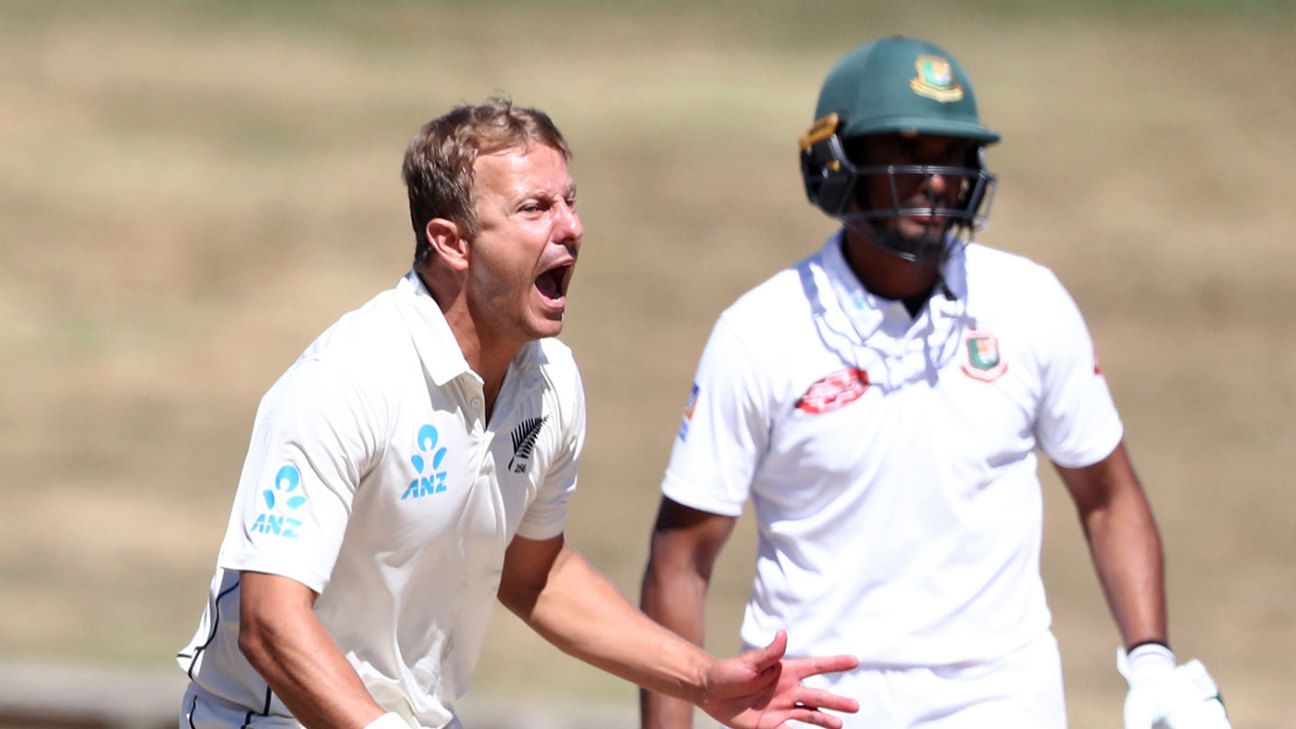 New Zealand faced their first challenge since Bangladesh’s arrival on their shores about three weeks ago in the Hamilton Test. They still won by an innings and 52 runs with a day to spare, but the fact that the visitors pushed back for much of the fourth day was a sign their celebrated bowling attack can be challenged.

New Zealand are No. 2 in the Test rankings, but were put under pressure in their own backyard while employing their tried-and-tested tactics at Seddon Park. Although Trent Boult finished with a five-for in the second innings, he would be a little peeved at conceding runs at 4.39 over 28 overs. Tim Southee was similarly treated by the Bangladesh batsmen, while Neil Wagner‘s bouncer barrage didn’t reap the expected rewards.

Tamim Iqbal, Soumya Sarkar and Mahmudullah batted well for long periods in Bangladesh’s second innings, particularly the latter two, whose fifth-wicket stand lasted 54.3 overs in which they scored at a clip of 4.31 per over.

New Zealand captain Kane Williamson, who was adjudged Man of the Match for the second double-century of his Test career, agreed that the visitors had done quite well against their short-ball plan, mainly from Neil Wagner who at times went overboard with his intensity when unable to pick a wicket.

“Coming back today with Bangladesh having more freshness, we knew it was going to be a big workload for the bowlers”

“I think it was a massive challenge for all the bowlers today,” Williamson said. “We were hopeful of wickets late in the evening yesterday, which was nice. But coming back today with Bangladesh having more freshness, we knew it was going to be a big workload for the bowlers. They were just trying to stick with plans for a long period, and perhaps force an error.

“[Wagner] is a little bit freakish with his engine because he can bowl for long periods of time. I don’t think any plan is sustainable forever. Bangladesh were brilliant [with] how they adapted with that tactic. It didn’t work very well for us today so we did had to go back to stop their quick scoring.”

As for their lone frontline spinner, Todd Astle, he went wicketless in his 20 overs in the game. Williamson said that given the limited opportunity he got, Astle hadn’t done badly, as he looked to threaten the left-handers when pitching the ball in the rough.

“He had limited opportunity in this game but when he did come on to bowl, I thought he was threatening particularly out of the rough to the left-handers,” Williamson said.

“We were not far away from the second new ball, which was important for the seamers. He was always next in line to roll his arm over whenever we got a breakthrough. He is a great team man and played a role with the ball today as well.”

Williamson said that he expected to have it tougher in the next contest in Wellington, seeing how Bangladesh fought back in the second innings in Hamilton. “I thought the fight today was as tough as Test cricket gets,” he said. “Yes, it was nice to be a long way ahead of the game but today was really tough Test cricket. It is what we expect and we know Wellington is going to be another tough match.”