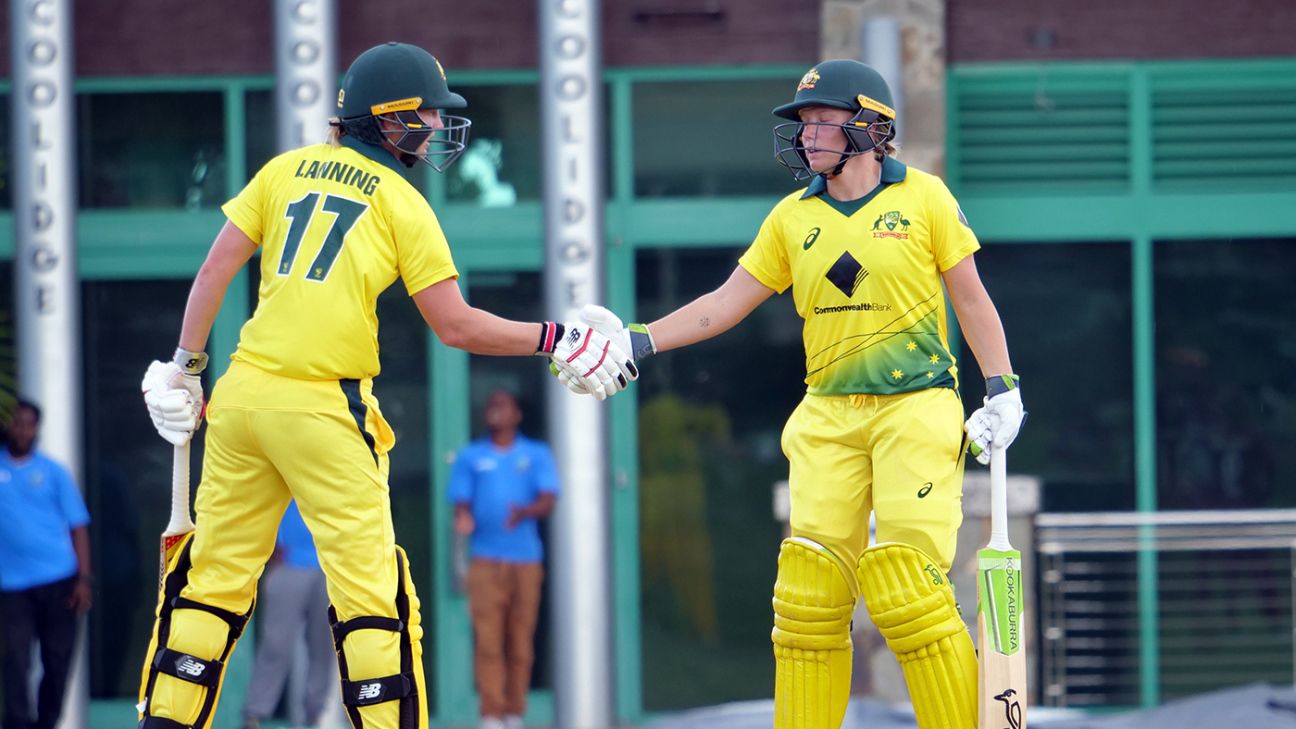 Australia women’s nine-wicket win in the final ODI over Sri Lanka women at Allan Border Field in Brisbane on Wednesday was a world record – their 18th win in a row in the format, surpassing the run by the team led by Belinda Clark between 1997 and 1999. Meg Lanning, the captain of the record-setting team, was modest at the post-match press interaction, but conceded that it was a “very special” achievement.

“It’s a special group to be a part of, especially over the last couple of years, probably since that 2017 World Cup [they lost in the semi-final to India] – it was a turning point for our group and we really did change a few things around, and we needed to, to be in the position we are now,” Lanning said. “Everyone’s put in a lot of hard work to get to this point, and to be able to get the record off the Belinda Clark team is certainly very special because there have been some amazing cricketers who have come before us.

“We speak a lot about making sure we look back at the past and understand what has come before us, because they certainly laid the foundation for where we are today. It’s important that we recognise that.”

The latest win was as commanding as you’d expect from this team. First, Nicola Carey and Jess Jonassen kept things tight and Georgia Wareham and Megan Schutt picked up a couple of wickets each to keep Sri Lanka to 8 for 195 despite Chamari Atapattu’s 103. Then Alyssa Healy came out to bash an unbeaten 76-ball 112 and, with Rachael Haynes hitting 63 and Lanning 20 not out in 11 balls, the target was crossed in 26.5 overs. The series was wrapped up 3-0, and the lead at the top of the Women’s Championship table over England has now stretched to eight points (from one fewer game).

“The WBBL prepares you extremely well for international cricket, it gets you in front of crowds, on TV, and the style of cricket is great as well. I’ve got no doubt that that’s lifted the ability within our team”

“It’s something we have made a bit of a habit of, of finishing off series really well,” Lanning said. “I know there’s been a lot of talk in the media about the record, but I can honestly say that within our group, we haven’t really spoken about it. We go into every game to try to win it. So it was no different today. So to finish it off in style was a great effort. We spoke about making sure we do that because we do sort of split up now as a group [for the Women’s Big Bash League]. I thought everyone did a great job, the bowlers especially, and Midge [Healy] and Rach with the bat.”

Adding a bit of flavour to the record-breaking win was Clark’s presence at the Field. Healy joked, “She just turns up at the opportune times! It’s the end of the series, and hey, there’s Belinda!” Lanning, meanwhile, pointed out that Clark had set yet another target for the team: “She sent me a message saying that her team only lost two games out of 33, so we need to keep going. So we’ve got one record, but we need to make sure we keep going. So we’re under strict instructions.”

Not just that, there’s one more record up for the Australians to target: the most ODI wins in a row, irrespective of gender, which currently stands at 21 in the name of the Australia men’s team, achieved between January and May 2003 under Ricky Ponting. That has to wait, though, because of the WBBL, as Australia next play ODI cricket in March in South Africa. “We’ll give it a crack,” Lanning promised.

It’s over to the WBBL then. And Healy, for one, is sure that the tournament will give the Australians the perfect way to prepare for the 2020 T20 World Cup, to be played at home in February-March next year.

“World Cups are extremely difficult to win, and we’ve experienced the highs and lows of World Cups over the last four-five years, so we’ve obviously got a bit of a chance to go into a different environment and keep improving our games and adding things to our game and that sort of thing,” she said. “Our group is hungry as ever to keep improving, and keep being successful. Once we get back together as a group [after the WBBL], hopefully [we will] continue to be successful.

“I think the WBBL prepares you extremely well for international cricket, it gets you on the big stage in front of crowds, on TV, and the style of cricket is great as well; the world’s best players from overseas and Australia playing, and it’s a great standard. I’ve got no doubt that that’s lifted the ability within our team and, as we have seen over the last two tours, we have brought players in who have been playing state cricket for a while and WBBL, and they have fitted in seamlessly and have looked at home on the international stage.”

And Healy has built up nicely to the WBBL, doing one of the things in the last game she hasn’t always managed to despite her staggering form: finish an ODI chase.

“I guess a little bit of a mental thing [getting out],” she said in response to a question. “I was saying to Meg today, often when I get to 60-odd I hit one in the air, so it’s all a bit weird. But to be able to be clinical and finish off the series really well, and be not out, is probably not something I have done a lot. So to do it today was obviously pleasing.”