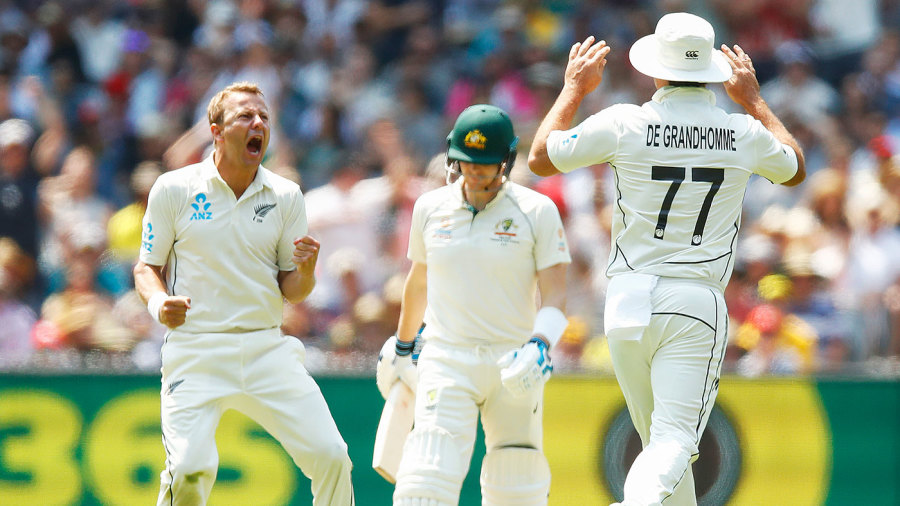 For the third time in three innings Neil Wagner bounced out Steven Smith to bring the second morning at the MCG alive but Australia remained in control as Travis Head moved to a half century as they reached 5 for 336 at lunch.

Smith and Head had played carefully through the first hour – which brought just 27 runs in 14 overs – as New Zealand toiled accurately but without huge threat. Things changed in the first over after drinks when Wagner produced a brute of a short delivery which Smith fended into the gully where Henry Nicholls took an excellent, finger-tip catch above his head.

Smith had only managed to add eight off 50 runs to his overnight score of 77 – that included driving the opening delivery of the day for three – and could not make it a fifth MCG hundred after battling through the opening day.

However, that was New Zealand’s only success of the morning as the game continued to drift away from them after deciding to bowl. Head, who was rarely comfortable after another short-pitched examination from Wagner, brought up his second fifty of the series from 109 balls which may well be enough to shift the debate away from him being the vulnerable batsman should one miss out at any stage. As often, he was particularly strong square through the off side whenever the New Zealand seamers strayed.

Tim Paine played aggressively at the start of his innings, and was keen to take on the short ball that did have him in trouble on a few occasions, and by lunch had moved into the 30s to take his stand from Head beyond fifty.

As on the opening day the majority of the bowling was done by the four seamers with Trent Boult’s second spell better than his first. Wagner was eventually relieved after a nine-over burst with Mitchell Santner introduced shortly before lunch, but he has not been entrusted with much work by Kane Williamon again leaked runs which will be an issue to ponder ahead of the next Test in Sydney.