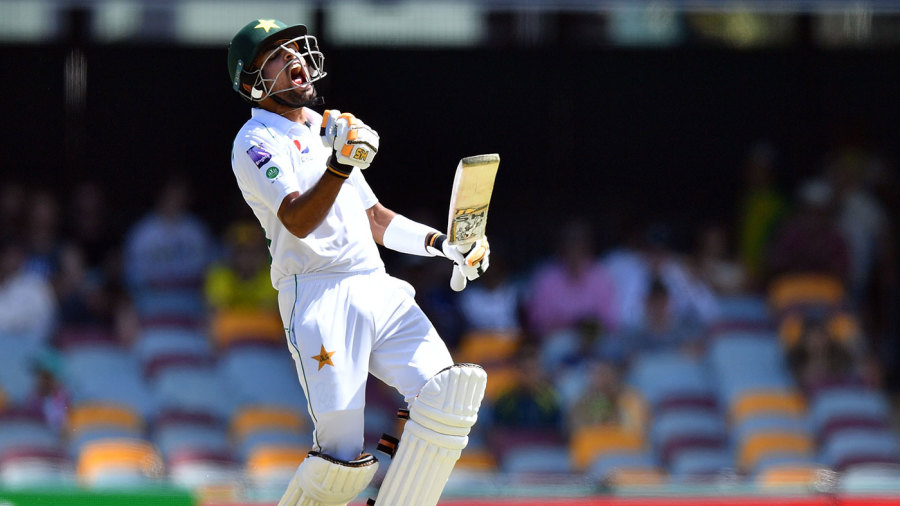 Australia were made to work harder than appeared likely in securing an innings-and-five-run victory on the fourth day at the Gabba as Babar Azam scored a magnificently classy second Test hundred and Mohammad Rizwan fell five runs short of his first before the tail went down swinging.

When Pakistan were reduced to 5 for 94 in the morning session – the same position they found themselves in the first innings – the prospect of Australia needing the second new ball or coming close to batting again seemed far-fetched. However, Azam and Rizwan added 132 for the sixth wicket then Rizwan was joined by Yasir Shah to put on 79 for the seventh.

The loss of Rizwan for 95, moments before the second new ball was taken, ended the resistance and the Pakistan fast bowlers were in for a good time, not a long time. Josh Hazlewood finished with 4 for 63 in what was Australia’s 13th straight victory at home against Pakistan.

Azam played an outstanding knock, a fine response to the poor stroke in the first innings which left Pakistan in trouble. He barely put a foot wrong this time, scoring freely around the wicket, with the driving standing out as so often in a typical Azam innings. There were no nervous nineties for him as he pulled Pat Cummins through midwicket before driving wide of mid-off to bring up his first overseas hundred off 160 balls.

Nathan Lyon brought his innings to a halt when a quicker delivery found the edge and Tim Paine took a sharp catch, but that was not a prelude to a swift conclusion as Rizwan matched Azam stroke for stroke only to upper cut Hazlewood to third man moments before the second new ball.

Significant damage had been done to Pakistan’s top order on the third evening and they resumed on 3 for 64. There were promising signs in the first hour as Azam and Shan Masood repelled the Australia quicks, although Masood was challenged by considerable seam movement Cummins extracted from the fourth-day wicket.

It was Cummins who struck first when Masood got a thin top edge on a hook and in the next over Hazlewood produced a peach to take a nick from Iftikhar Ahmed. Pakistan have had no contribution from two of their top six in this match – Ahmed and Haris Sohail – and it will give them plenty to ponder ahead of the Adelaide Test on Friday.

Australia sensed an early wrap-up but then hit the roadblock. A sweetly-timed drive off Mitchell Starc took Azam to his half-century; his judgement of length against pace and spin was a standout feature of the innings. There was moment of mild concern on 75 when Australia reviewed an lbw shout from Hazlewood which was umpire’s call on trimming the bails.

Azam’s Test career has been on an upward curve over the last 12 months and he tuned up stylishly with a hundred against Australia A, but this could yet be a crucial moment in the career of a batsman who is earmarked as one who can join the elite.

Rizwan, in his second Test, had shown his feisty qualities in the first innings before edging a Cummins delivery which was a borderline no-ball that many felt should have been called. He played second fiddle to Azam for the first part of his innings but became more aggressive during the afternoon and evening session. His duel with Lyon – whom he slog-swept to bring up his maiden Test fifty from 86 balls – was especially absorbing. The offspinner targeted the footmarks created by Starc and Rizwan was keen to use his feet, highlighted by a wonderful drive through the covers that almost brought applause from the bowler himself.

On 92 it appeared he may have fallen to one of the great short leg catches when Marnus Labuschagne moved with a paddle sweep, the ball lobbing behind square with Labuschagne flinging himself full length to get the ball in his fingertips but the third umpire ruled it had been grounded. Subsequent replays suggested it hadn’t hit the bat in any event.

Perhaps keen to reach three figures before the new ball, Rizwan’s eyes lit up when Hazlewood’s first ball back was short outside off and he sent it straight to Lyon at third man. The only question then was whether the final three wickets would make Australia’s openers pad up. Yasir – whose batting was encouraging for Pakistan in both innings – missed a maiden Test fifty when he got a leading edge to mid-off and three overs later Matthew Wade’s catch at long-on was the final act in another comprehensive Gabba victory for Australia.