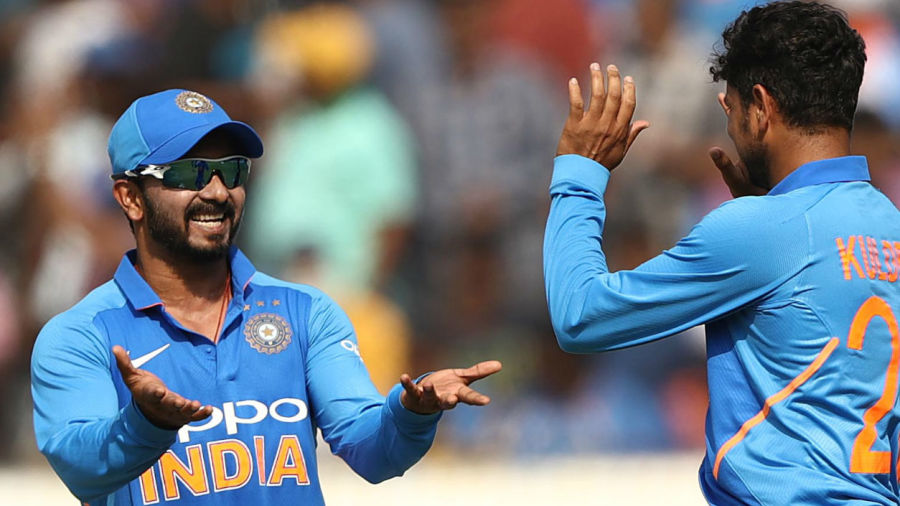 There was a moment in Hyderabad when it looked as though India would have it tough, but in the end, their chase was comfortable as the middle order eased them home in a match that felt more like 1999 than 2019.

India are fine-tuning their plans in their last series before the World Cup – so much so that Virat Kohli said it was a good thing to be in a spot of bother at 99 for 4 – while Australia still have some key structural issues to address. Although the surface in the opening match did not prove as easy for stroke play as may have been imagined, Australia still seem intent on the approach of laying a steady foundation in the Powerplay: after ten overs they were 38 for 1, and none of Usman Khawaja, Marcus Stoinis or Peter Handscomb finished with a strike rate over 70.

The middle overs were dominated by India’s spinners hustling through and batsmen unable to break free. Ravindra Jadeja’s ten overs went for just 33 and Kedar Jadhav’s right-arm slingers did a terrific job. Jadhav’s seven overs were the bulk of the fifth-bowler allocation and that remains one of the areas India need to firm up before the World Cup. Vijay Shankar was a weak link in the attack, initially releasing the pressure applied by excellent new-ball spells, and does not appear the quality of a third seamer.

One of the bright spots for Australia early in this tour has been the form of Nathan Coulter-Nile, who might be forcing his way into the World Cup squad with strong lower-order batting and splice-jarring bowling spells. He had a frustrating home summer and vented a little at the selectors after being left out of the one-day squad but he could yet find himself in the United Kingdom.

If Kedar Jadhav‘s bowling arm got any lower he’d be sending them down underarm. It is an unconventional tactic, one that he has used for some time, and proved very effective in the opening match where his seven overs went for 31 runs and included the wicket of Stoinis – with one of the highest release points of his spell. In this era of one-day cricket, bowlers have to come up with all sorts of skills to counter a bat-dominated game. Now it’s up to the batsmen to respond to Jadhav’s method.

Usman Khawaja is the latest option to be slotted alongside the struggling Aaron Finch at the top of Australia’s order. He top-scored with 50 in the first match but it came off 76 balls, which feels behind the times, even if he had to deal with demanding spells of Mohammed Shami and Jasprit Bumrah. In his four matches since being recalled, Khawaja’s strike rate is 70.99. If he is to be a long-term solution at the top – and there remains the feeling he is just keeping the seat warm for David Warner’s return – then he needs to show he can move through the gears.

India are favoured to stick with their combination from the opening match, which would mean another chance for Shankar, but could switch around the spinners with Yuzvendra Chahal coming in for Kuldeep. And if there were any concerns over MS Dhoni’s fitness, with the wicketkeeper-batsman struggling to run between the wickets in the first game, they have been dispelled, with him batting at full tilt in the nets the day before the Nagpur game.

Shaun Marsh, Australia’s standout one-day batsman over the last nine months, took a full part in training after his late arrival on the tour and could return in place of Ashton Turner. That would likely mean the middle-order batsmen moving down a spot.