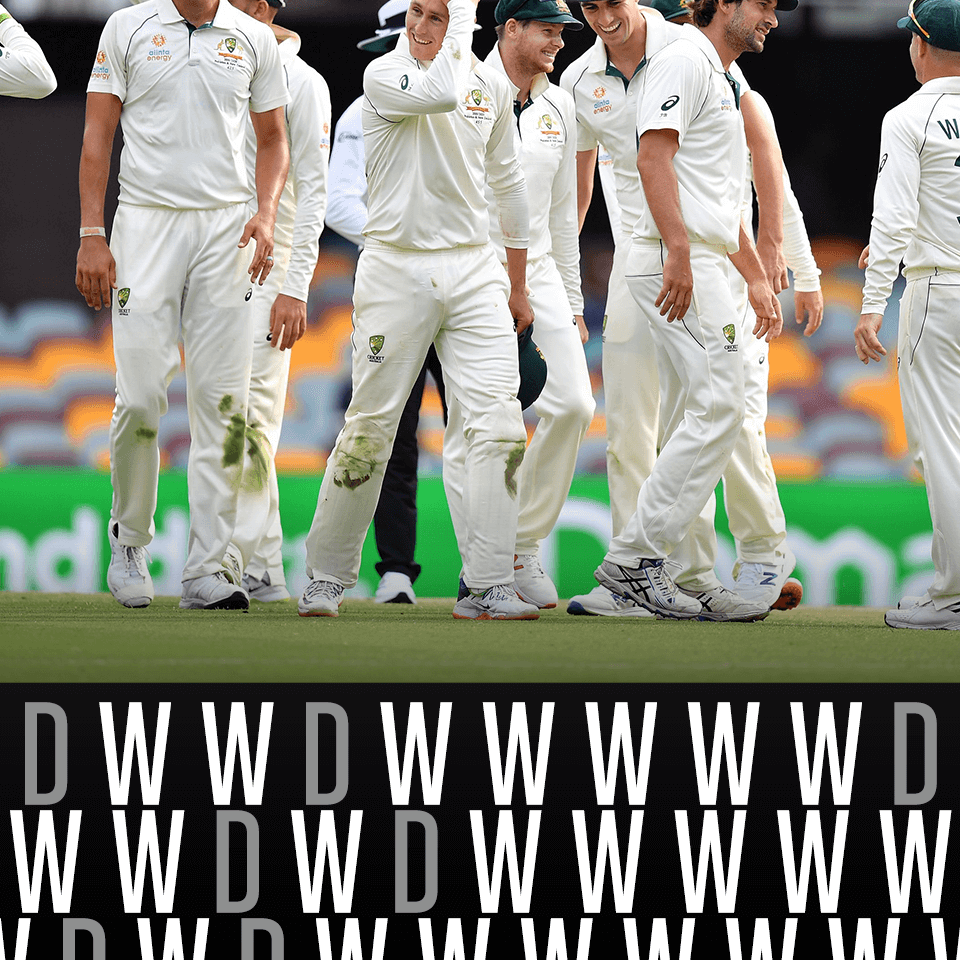 An innings victory that delivered Australia the makings of a settled top six, underlined the quality of the bowling attack that retained the Ashes, and hoisted the hosts into second place on the ICC’s World Test Championship table was more or less all that Tim Paine‘s men might have asked for at the start of their week at the Gabba.

That Joe Burns, David Warner and Marnus Labuschagne all provided plenty of reassurance with the bat was perhaps the highlight of all this, married with the fact that for the first time in an awful long while, Steven Smith was permitted to play a relatively minor role in an Australian Test match victory.

After a year of trials and reintegrations, these were heartening signs for Paine, the coach Justin Langer and company, even if Pakistan recovered from their ruinous first-day collapse by improving with each day of the match, so much so that they came within five runs of making Australia bat again. They will seek greater improvement in Adelaide, perhaps aided by a recall for Mohammad Abbas, as Paine’s team ponders how much it has improved the things it can control, while also thinking a little about what it cannot.

“I think we’ve known Burnsy is a quality opening batter for a long time,” Paine said. “It’s great to have him back in the side, I think he’s got a great combination happening with Davey [Warner]. And I think Marnus was given some opportunities 18 months ago when some people probably thought he shouldn’t have [got them]. But obviously selectors saw the talent he had and he’s taken the experience he learnt to England, got even better, came home to Australia and looks like he’s got better again. We’re really happy with the top three in this game.

“One innings doesn’t make a summer but we’re really happy with the positive signs we saw. Every time you pick [a side] you want to be able to stick. It’s been hard to have stability because we haven’t been performing as well as we would have liked. England is a tough place to bat so there is always going to be a little bit of up and down with your results over there as a batting group. But I think we’ve nutted out a pretty good group at the moment, a group that can still get a lot better.”

“I thought our bowlers in this game were terrific. We’ll get to Adelaide, have a look at the conditions, we’ve got the pink ball as well, so that’ll come into consideration, but I thought the four that played in this game bowled really, really well.”

Paine was in little doubt that the hosts had been given one major advantage even before the match began, when Pakistan chose not to choose Abbas. Regardless of how well he may have been bowling in the present moment, Abbas would have walked onto the field with a major psychological hold on several of Australia’s batsmen.

“I was pretty happy he didn’t play if I’m totally honest,” Paine said. “I thought in the UAE on wickets that offered him absolutely nothing he somehow made it move. I think he probably would have been a handful out there. Having said that I think they said he might have been under an injury cloud or he hasn’t been bowling at his absolute best. We’ll wait and see, I’m sure he’ll be looked at pretty quickly for the next Test match.”

So while Pakistan had made life easier for Australia, there are other external factors that are not quite so rosy. The concept of the World Test Championship and its various vagaries was underlined by how Australia gained 60 points for a single victory in Brisbane as opposed to 56 combined for the two wins scrapped and scraped for to retain the Ashes in England.

Although Australia are now second on the table, they are dealing in a system of swings and roundabouts that also features non-championship matches, whether England’s in New Zealand right now or a one-off Test against Afghanistan at the start of next summer.

“The main thing is that now every Test match counts, unless it’s England and New Zealand,” Paine quipped. “There’s a few things, it’s not perfect but I think the players are rapt there’s a Test World Cup that’s up for grabs. I think over the years the points system will improve. We’re certainly tracking it, because one of our goals is to be there, [the final] is certainly a date on the calendar we’ve put down as a group.”

That goal may face another obstacle in terms of the myriad of factors going into next summer’s home Test schedule. Paine reiterated his personal preference to stage a similar smash-and-grab performance against India this time next year, although he wryly suggested that might also depend on Virat Kohli’s preferences. There will also be the issues of Afghanistan’s match, and jostling between Cricket Australia, state governments, broadcasters and venues for the best spread of facilities.

Brisbane’s relative indifference to Test cricket and the Gabba’s various drawbacks in terms of amenities will also play a part. This match was watched by 45,891 people over four days, a long way short of the 66,325 who watched the first three days of a day-night match between Australia and Pakistan here in 2016. Yet it was also a marginally better crowd than that who assembled to see Adam Gilchrist debut and Australia win by 10 wickets 20 years ago.

“We’ll certainly try [to start at the Gabba] but we’ll have to run that by Virat. I’m sure we’ll get an answer from him at some stage I’m sure,” Paine said. “That’s where we like to start our summer and has been for a long, long time except for last summer. As I said we’ll ask Virat, see if we can get his permission to play here. Maybe even get a pink ball Test, if he’s in a good mood.

“We like playing here. Australian teams have bowled and batted well here for a long time. We’d like to start here against anyone. Having said that it doesn’t win us games of cricket. The reason we win games of cricket at the Gabba is because we outplay our opposition.”

So as well as Australia might have played in Brisbane, with all the fresh sustenance offered by the likes of Burns and Labuschagne to complement a renewed Warner alongside the dependable Josh Hazlewood, Pat Cummins, Mitchell Starc and Nathan Lyon, this was not a week without storm clouds looming on the horizon. Whether they rain on a burgeoning Australian parade will be a matter as much of good fortune as good management.