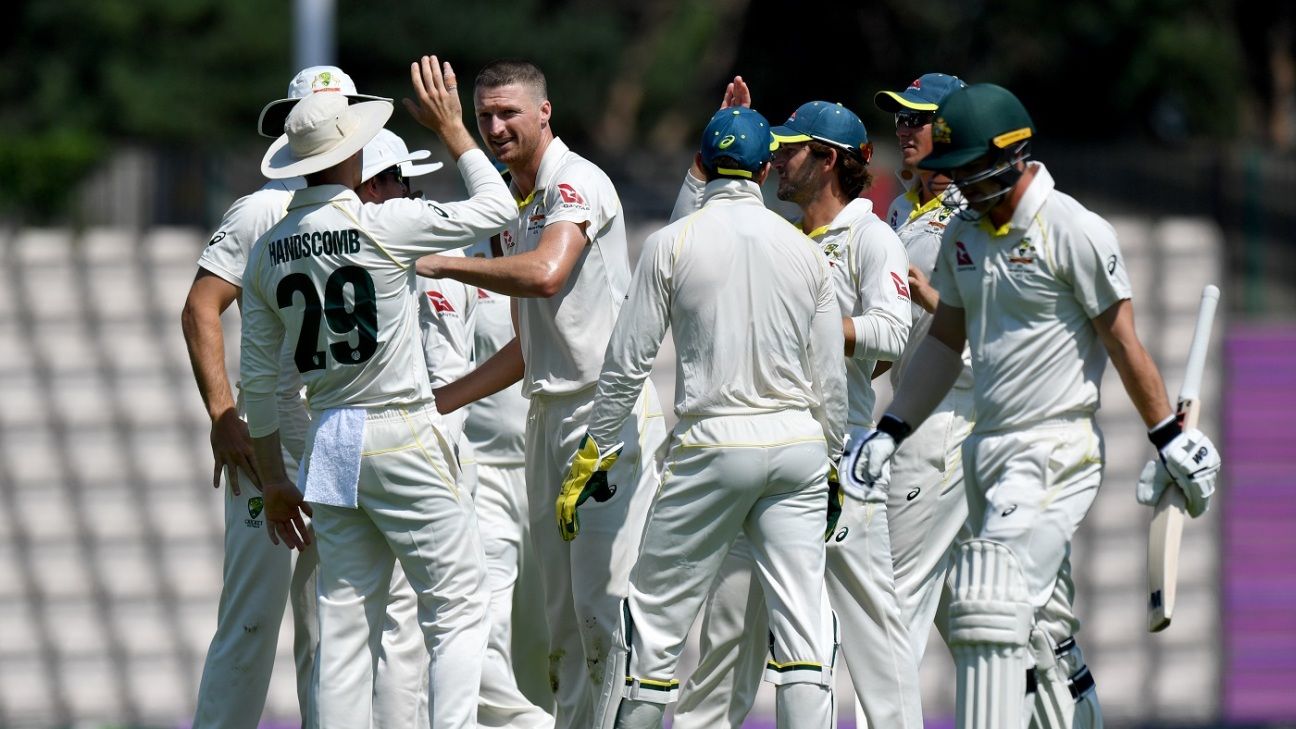 In their quest to avoid a repeat of the batting humiliations in Birmingham and Nottingham four years ago that led to the loss of the Ashes, it cannot have been in Australia’s warm-up plans to stage such a faithful re-enactment.

Requesting a seaming, bouncing surface as part of a training camp deal brokered directly between Cricket Australia and the Hampshire chairman Rod Bransgrove always left open the possibility of a rush of wickets when the Dukes ball did as expected. Not only was the pitch well grassed on top it was dry underneath, meaning there was variable bounce on offer as well as seam.

But to see the “Haddin XII” shot out for 105, by an attack featuring only James Pattinson among the pace bowlers expected to form the front rank of Australia’s attack for the Ashes, was cause for at least slightly furrowed brows for the head coach Justin Langer and his support staff. By stumps the “Hick XII” had fared little better, limping to 96 for 7, for a combined tally of 201 for 17 across a most eventful day.

Compounding the diversion from likely plans was the fact that the only member of the Haddin XII top seven to reach double figures was Marnus Labuschagne, who demonstrated typical grit and thought in scrounging his way to 41 with the help of the good fortune required to survive on a pitch this lively. Labuschagne is, at best, vying for one of the last couple of spots in the squad, whereas David Warner (four), Marcus Harris (six), Travis Head (one), Kurtis Patterson (two) and Alex Carey (six) are all more probable to figure.

Equally, the new-ball spell of Pattinson turned plenty of heads but went wicketless, while Michael Neser and Jackson Bird struck frequently with a combination of swing, seam, bounce and pace from unerring lines. They were helped, too, by some inattentive shots – Warner was too early into his drive and Head too rash in throwing the bat at an angled ball, tendencies both will want to avoid during the Ashes proper.

When the Hick XII took their turn to bat, the heavy roller and 31C temperatures had served to calm the surface somewhat, allowing Joe Burns and Cameron Bancroft to gain a foothold.

Their dismissals to Peter Siddle and Pat Cummins cleared the way for Steven Smith to get briefly re-acquainted with red-ball combat, before Matthew Wade was given caught behind and made clear he was far from happy with the decision. Pete Handscomb and Tim Paine also stayed only momentarily, before Mitchell Marsh departed in the day’s final over. Cummins and Siddle had plenty of reason to be pleased with their work.

Quirks abounded in this fixture, not taking first-class status but also constituting far more strenuous preparation than the equivalent county games at Canterbury and Chelmsford in 2015. Twelve players a side, with 10 wickets completing an innings, 96 overs to be bowled in the day and the pitch located to the eastern edge of the square. Upon winning the toss, Paine was more than happy to bowl first, consigning Head’s team to the sorts of conditions that have undone Australians in England so many times before.

Pattinson wasted little time making his mark, striking Warner in the chest with a rising first delivery, and moving the ball at pace while also extracting steepling bounce. It was Neser, however, who coaxed Warner into the drive, pinned Harris lbw with a ball straightening down the line of the stumps, and later returned to defeat Mitchell Starc and Cummins, the latter’s off stump plucked out by late movement away.

Bird also fared well, tempting out Head and winning lbw verdicts against Patterson and Carey. Through it all Labuschagne offered a deferential defensive blade, salting away his runs with furtive deflections and the occasional boundary in a stay that, at 81 balls, lasted longer than the collective stays of the rest of the top five combined. He has done his Ashes chances no harm whatsoever.

Another question confronting Langer and the selection chairman Trevor Hohns is whether Starc’s speed will be as dangerous in the Ashes as it was for most of the World Cup. He took the new ball for Head, and was certainly fast, at one point stinging Burns on the gloves. But the more dangerous trajectories looked clearly to be those of Siddle, who ended a 38-run opening stand between Burns and Bancroft, and Cummins, who found a scorcher for Bancroft and then beat Wade numerous times.

Smith offered up a pair of delectable boundaries through midwicket and cover, but dragged a full ball from Cummins onto the stumps when trying to repeat the dose. Wade’s exit was no more graceful, seeming to suggest that a ball from Hazlewood had struck arm rather than bat or glove. Less doubt surrounded Handscomb’s lbw, stuck on the crease to Cummins, or Paine’s glance down the leg side into the gloves of his back-up Carey.

A late pressure release arrived via some loose stuff from Starc, only for Marsh to be bowled by Siddle in the day’s final over. Given all that had gone before, this was only fitting.