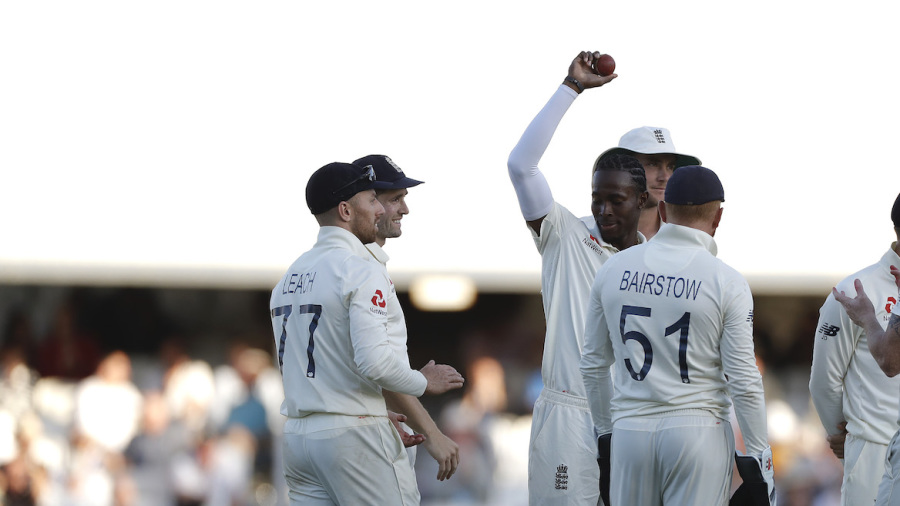 If Australia want to take a series victory as well as retaining the Ashes they will have to do it the hard way after Jofra Archer claimed his second six-wicket haul, and Sam Curran enjoyed an eye-catching return to the side, to earn England a priceless 69-run lead despite another fine innings from Steven Smith.

To no one’s surprise, Smith top-scored but this time fell for 80 – his lowest score of the series – when he was lbw to Chris Woakes, the moment when England probably believed they could end the innings with an advantage. While Smith was there, even with the tail, anything was possible and England would have feared the worst when Joe Root dropped him at slip on 66.

Neither was it a quiet end to the day with Joe Denly, who was late to the ground on the second day after the birth of his daughter, dropped in the slips by Marcus Harris and against the final delivery Rory Burns was given lbw to a ball which DRS showed had pitched well outside leg stump. A day of solid batting – and that’s far from assured from either side in this series – and England will have share of the series in their sights.

Marnus Labuschagne continued in his role as Smith-lite but either side of that pair there were familiar problems for Australia with the openers again dispatched cheaply – David Warner with a hint of DRS controversy – and the middle-order failing to offer the support Smith needed.

The major shift in the innings came after tea when Australia lost 4 for 27 – including the scalp of Smith – with Curran producing a terrific six-over spell of left-arm swing which accounted for Tim Paine and Pat Cummins in consecutive deliveries. Archer then claimed his fifth wicket to halt a troublesome ninth-wicket stand between Peter Siddle and Nathan Lyon before a spectacular catch at gully by Burns round up Australia. It left Archer, who didn’t bowl his fastest but had an excellent control, with 6 for 62 to follow his 6 for 45 at Headingley.

England had resumed on 271 for 8 with Jos Buttler and Jack Leach taking their stand to 68 before the innings was wrapped up by Mitchell Marsh‘s first five-wicket haul in Tests. If there had been a lot about the home side’s display that felt like groundhog day, the same could certainly be said when Australia came out to bat.

Warner managed to get off the mark for the first time in four innings but didn’t go much further. It wasn’t Stuart Broad who removed him this time, instead a slash at a wide delivery from Archer which Ben Stokes, at second slip, was convinced had been edged and encouraged Root to review. The initial replays suggested daylight between bat and ball, but then a spike appeared on Ultra Edge. Warner appeared happy enough to walk off.

Harris has struggled since replacing Cameron Bancroft and was squared up from around the wicket by Archer, who claimed 2 for 7 off seven overs in his opening spell, with Stokes again in the action as he grabbed a low catch at second slip to leave Australia 14 for 2. That marked the next stage of the contest: Labuschagne and Smith. Either side of lunch it went Australia’s way, although Smith was more uncertain than previously in the series, particularly against Archer and the different angled presented by Curran to whom he twice padded up leaving the ball.

It was Archer who sparked England early in the afternoon with a hostile spell to Labuschagne who took a painful blow on the right arm before being pinned lbw, a plan coming to fruition for Archer who had probed away for such a dismissal – similar to how he removed him in the second innings at Old Trafford. After tea he would strike again, having Marsh caught at long leg off a poorly controlled half-hearted pull following another series of short deliveries which had also seen a rare error from Smith when he top edged short of deep square.

Matthew Wade wanted to be positive but was beautifully set up by Curran who sent down a series of away swingers before bringing one back into the pads which Wade played across. That was just a prelude from Curran when, after tea, he produced trademark left-arm dismissals by slanting one across Paine then swinging one back into Cummins’ boot in a spell that would read 6-4-6-2. There is a feeling no one really knows what sort of cricketer Curran will become, and how to best fit him in an England Test side, but the bare facts are he has won six out of six Tests at home and played a key role in most of them.

Before all that, Smith had moved to another half century by depositing Leach over long-on – in the process moving beyond 700 runs for the series and into the top 20 of all time – but Curran should have had the most prized scalp to his name as well when Smith tried to upper cut a short delivery. The edge flew high towards Root, but Stokes started to go for the catch which may have disturbed the England captain and it burst through.

For a short while it looked more likely that he would run out of partners than be dismissed, but the first ball of a new spell from Woakes brought the moment England have strived so hard for when Smith missed a straight one. This has been a series full of surprising moments and that was another.

Lockie Ferguson not rushing return from calf injury
Ben Foakes refreshed after winter off and ready for England second chance
Mayank Agarwal, Rishabh Pant among the runs as India tick most boxes in warm-up game
Foakes and Jennings on the rise, Bairstow and Moeen slide from view
South Africa take the upper hand, sound familiar?