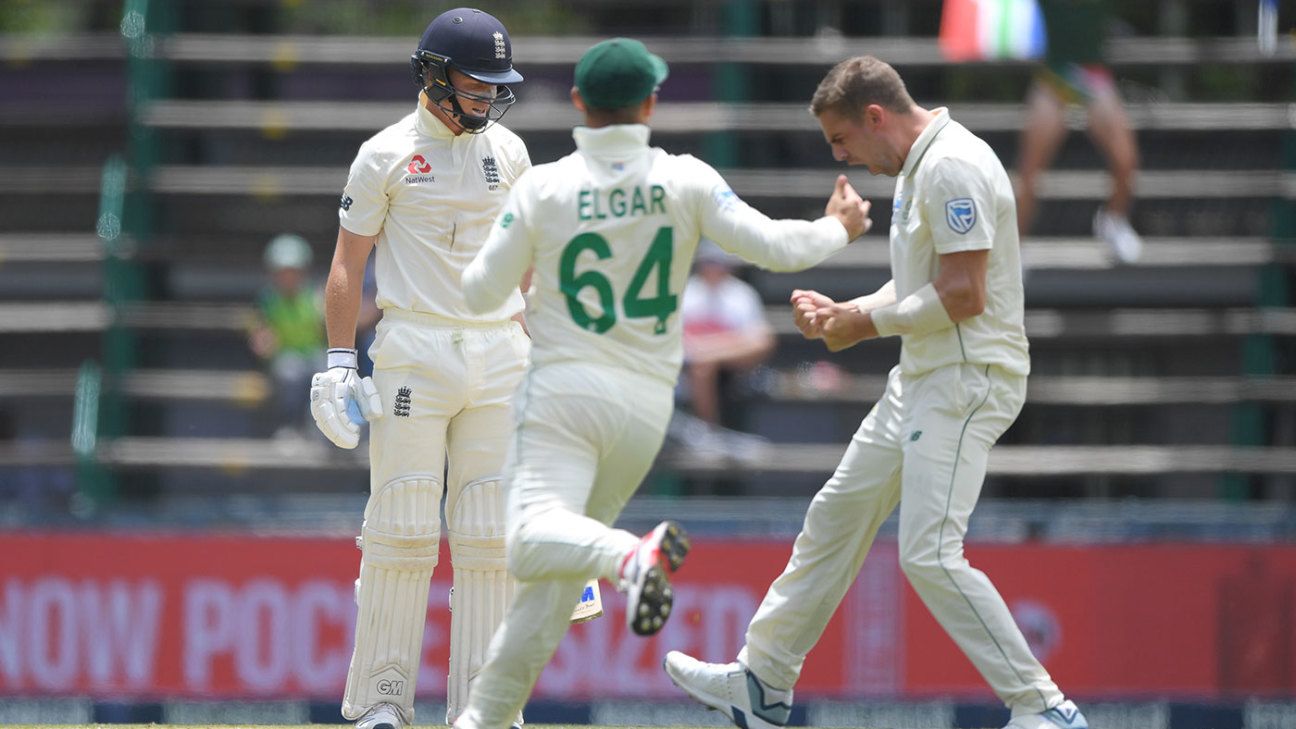 It sounded like a party. The Unity Stand was drowned in song that the so-called traditional watchers of the game in this country would not have recognised. The Gwijo Squad – a supporters’ club formed in 2017 who sing Zulu and Xhosa songs – made their first appearance in this series and immediately changed its tone.

It didn’t matter that South Africa were conceding the highest 10th-wicket partnership at the Wanderers and allowed England to finish on 400 or that the hosts were 60 for 4 in reply. In fact, it fuelled them. The worse South Africa’s situation got, the louder the Gwijo squad’s messages of hope rang out and the more they intended to inspire. They reserved the loudest for Temba Bavuma, son of this stadium and the only black African player in the XI.

Loosely translated (credit to Makhaya Ntini) those lyrics mean: “That’s Temba, and if you didn’t know it before, you will see him now.”

When Bavuma drove the first delivery he faced through the covers, teasingly close to the boundary, they erupted into a cheer that belied the seriousness of the situation South Africa, and Bavuma, were in. They’re both chasing the game and they both have massive points to prove.

South Africa’s chances of winning the match look increasingly thin, especially as the follow-on target is still 113 runs away. Defeat will mean a third consecutive series loss and may spell the end for captain Faf du Plessis. It was his dismissal – an unlucky one given that he was hit above the knee roll on a pitch renowned for its bounce, but the on-field decision was upheld on umpire’s call – that brought Bavuma to the crease, with a grossly unfair burden.

South Africans expect Bavuma to perform, especially after the fracas over him being left out of the second and third Tests, despite having recovered from a hip injury and with his career-best 180 still to come. “In Temba we Trust,” read one banner. But their faith was only repaid for 38 minutes, before Bavuma was caught, low in the slips, by none other than South Africa’s arch-nemesis, Ben Stokes.

Only then, did South Africa’s real hero (if anyone in their XI can be given such a lofty title) emerge. Anrich Nortje, whose nightwatchman’s vigils in the first and third Tests earned him the respect his top-order should command, walked out to a hopeless situation.

Having dragged South Africa to the edges of an advantage earlier in the day, with his maiden Test-five-for, he was now expected to drag them away from the point of no return. Late in the day. With not so much as an acknowledgement that he was there. Unless you count the lady draped in a South African flag who managed to invade the playing area and make some solid ground towards the crease before security officials caught up with her.

In muffled tones, the Gwijo squad continued to sing while the Barmy Army overpowered them with their version of Living on a Prayer (We’re halfway there, five wickets down and all that). It was hardly the reception that Nortje deserved.

His efforts in the morning saved South Africa’s blushes after they had looked likely to endure a fourth successive opening session without claiming a wicket. Nortje changed that, during the course of an eight-over spell which injected energy into a limp attack and showed the advantage of proper pace on this pitch. Nortje kept the speedgun north of 145kph on almost every ball and the last delivery of the 48 he bowled in the morning clocked in at 148kph, more than an hour he sent down his first. If you want evidence of commitment and consistency, that’s it.

Like most of the attack, Nortje erred with his lengths and was often bowling too short, but unlike them, he produced several threatening deliveries that targeted the body and teased the outside edge. With the old ball, he got Ollie Pope playing on, then Joe Root and Sam Curran in successive deliveries to put South Africa in a position from which they could limit England to something close to the average first-innings score at the Wanderers: 319. Nortje’s 3 for 40 could have changed the game, and his new-ball strike to remove Chris Woakes should have meant the England innings was almost at an end.

Instead, it went on for another 8.2 overs as questions over du Plessis’ captaincy mounted. Why were the bowlers persisting with short and wide lengths and lines? Why were there eight fielders on the boundary? Why was Dwaine Pretorius unused in that period? “I really don’t have any answers for you,” a sheepish Nortje said afterwards.

ALSO READ: Wood shines with bat and ball to push SA to the brink

No-one could have expected him to. Although Nortje has leapfrogged Kagiso Rabada to the top of the series wicket-takers’ list, with 16 at 26.68, and in this match, he replaced Rabada as the leader of the attack, he is not the person who should be held to account. Nonetheless, he was the designed representative to address the media, after he was dismissed by the last ball of play. Again, it was not the audience Nortje would have wanted but, as he has already discovered, “you can’t choose”.

Those words came in reference to his first five-for being eclipsed by the batting fragility when he would have preferred it to have been taken in a dominant situation, but there are other things Nortje could not choose in this Test. He could not pick his bowling partners, and even though he refused to lay the blame on any of them (“It’s a collective unit. It’s not one or two of us.”) it is obvious that Dane Paterson and Beuran Hendricks would not be first-choice if Kagiso Rabada and Lungi Ngidi were fit. He could not choose the fielding strategy, which seemed misguided, and he could not choose how early he was needed with the bat. Most of all he could not choose where the attention will focus today, and it’s not on him.

Maybe for tonight, it’s not even on South Africa’s problems. Minutes after Nortje was dismissed, the Wanderers crowd began making their way to their Saturday nights and the Gwijo squad assembled for one last song and dance which they kept going all the way to the main gate. It sounded like a party. But the scorecard will tell that it really was not.

Nothing between them as South Africa and England prepare for decider
Kane Williamson lauds New Zealand’s ‘cricket smarts’ after series win
Ben Foakes refreshed after winter off and ready for England second chance
Objective is ‘to play like the world’s No. 1 Test team’ in New Zealand – Ravi Shastri
India to play day-night Test in Australia, Ahmedabad likely to host pink-ball Test against England