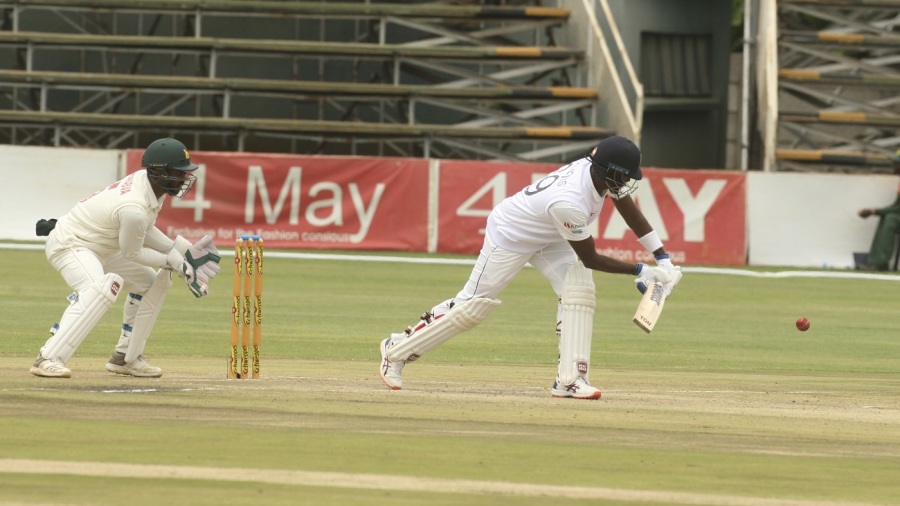 For the fifth time in as many sessions, Sri Lanka lost just one wicket and made steady progress in Harare. Through the course of the fourth morning, Angelo Mathews also completed a hard-fought, tenth Test ton, Dhananjaya de Silva made a fifty, and then Sri Lanka edged into the lead. With Niroshan Dickwella now settled at the crease after de Silva’s dismissal, Sri Lanka will have their sights set on a hefty lead. The most likely route to a result in what has been a slow-burning Test would be for Sri Lanka to bat just once, and bowl Zimbabwe out cheaply in the third innings. The surface, though, has not shown any serious signs of wear yet.

Yet again, debutant Victor Nyauchi was Zimbabwe’s best bowler. He not only claimed the wicket of de Silva, who holed out trying to stroke him aerially down the ground but also threatened Mathews’ outside edge repeatedly, with balls that were angled in, and straightening off the seam. His control was excellent again – he has now bowled 29 overs in the innings and conceded only 56 runs. Senior seamer Kyle Jarvis delivered an earnest spell as well, but the quicks had little support from the spinners, who were only occasionally able to trouble the batsmen.

Early in the day, de Silva had hogged the strike and swiftly moved past 50, while Mathews laboured in sight of his century, having been on 92 overnight. When Mathews was on 96, there was a good shout for lbw, when he shouldered arms to a Donald Tiripano ball that might just have shaved the top of off stump. Next over, when Mathews was on 98, Jarvis hit him on the helmet with a bouncer and thought he had had the batsman caught off his glove when the umpire appeared to be raising his arm. However, it turned out the umpire was just signalling a bouncer.

Eventually, Mathews went to triple figures off the 272nd ball he faced, turning Jarvis into the legside for a single. He had hit seven fours and two sixes in his innings, with only one of those boundaries coming off a seam bowler.

De Silva was dismissed trying to raise the tempo – he had struck the previous ball for four through the covers – but his replacement Dickwella made sure he batted securely through the rest of the session, rather than himself attempting to hit out. Mathews could have been out on 108 as well, when he offered a thick edge to the keeper, who failed to hold on to a very tough chance, off the bowling of Ainsley Ndlovu.