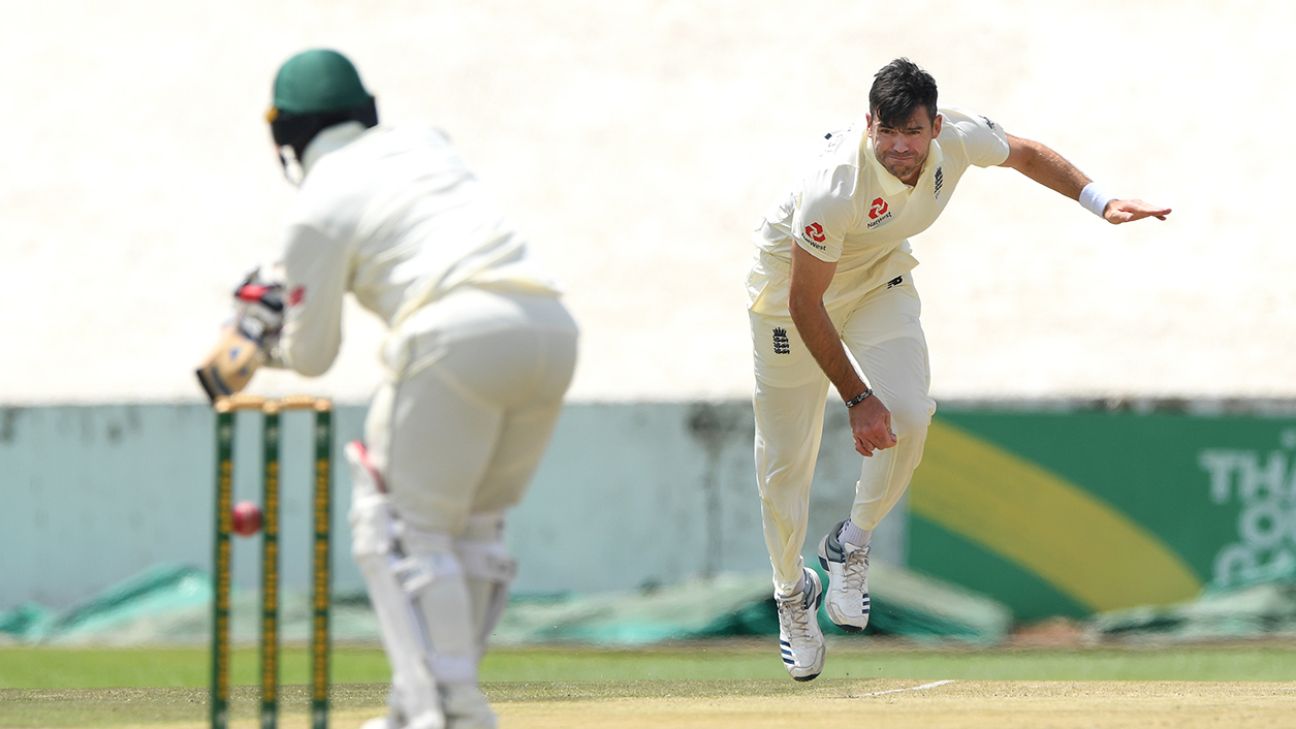 James Anderson picked up a wicket in his first competitive work-out since August, but England’s hopes of fine-tuning their bowling attack ahead of next week’s Boxing Day Test were undermined by illness as their opening warm-up finished as a draw in Benoni.

Anderson, who had not bowled in a match situation since aggravating a calf injury during the first Ashes Test, claimed the respectable figures of 1 for 37 in 11 overs, as the SA Invitational XI were bowled out for 289, in reply to England’s first-day total of 309 for 4 declared.

However, with three of England’s front-line bowlers – senior seamers Stuart Broad and Jofra Archer plus first-choice spinner Jack Leach – all laid low by an illness that has hit the camp, the team’s resources were stretched thin, even allowing for the non-first-class nature of the match.

Ben Stokes was also unable to bowl, having arrived late on the tour following the Sports Personality of the Year Awards in Aberdeen on Sunday (although he did field). Mark Wood, who is still recovering from a side strain, was also unavailable, leaving the seam bowling in the hands of Anderson, Sam Curran and Chris Woakes.

“A few guys have gone down a little bit ill, so obviously they’re back in the hotel trying to steer clear of everyone,” said Woakes. “Hopefully it’s not too bad, hopefully it’ll be a couple of days out and they’ll be back on their feet.”

Root ended up bowling himself for 13 overs – more than any of his quicks – while the bulk of England’s workload was carried by the legspinner Matt Parkinson, who claimed two late wickets to improve his figures after some rough early treatment in his 20-over spell.

After England had declared on their overnight score, Curran gave England an early boost with two new-ball wickets, including a well-directed outswinger that bowled the left-hander Isma-eel Gafieldien for 2 in his first over.

But the SA XI’s innings was built around a trio of half-centuries from Kabelo Sekhukhune, Jacques Snyman and the captain Diego Rosier, as England’s threadbare attack was made to work for further breakthroughs.

Anderson ended a 133-run stand for the third wicket when he had Sekhukhune caught behind for 65, and then, 20 runs later, he was in on the action in the field as well, taking the catch that ended Snyman’s stay on 79, to give Woakes the first of three wickets in the space of 11 balls.

Later in Woakes’ same over, Kyle Simmonds picked out Stokes for a duck, before Sizwe Masondo was caught behind for 4 to leave the SA XI uncomfortably placed on 175 for 6.

They regrouped, however, with Rosier to the fore in a well-crafted 70 from 88 balls, and by the end of an underwhelming day’s work, Root and Parkinson were bowling in tandem to save England’s quicks from further effort.

Both men duly picked up two wickets, Parkinson bringing the match to an early-afternoon conclusion when No.11 Stephan Tait missed a sweep to be adjudged lbw for 0.

“It’s a good run-out for us,” said Woakes. “Obviously in the last couple of weeks, we flew back from New Zealand, [had a] week at home in a different climate, then came back out here, so it was a pretty pleasing couple of days for us. It was good to get a run-out, overs in the legs, the usual pre-tour sort of stuff really. We’ll take a few positives from it.”

On a fairly unresponsive deck, Woakes regularly turned to the short ball in a bid to force a breakthrough, and felt pleased with how he had fared as he continues his recent upturn in fortunes with the Kookaburra ball.

“I’d like to think I’m a bit different bowler, obviously more experienced,” he said. “We’re always looking at ways to develop skills with the Kookaburra ball, trying to find ways to get it moving. I think in South Africa you might be able to utilise a bit of reverse, particularly in the longer games, so I think I’m a different bowler.”