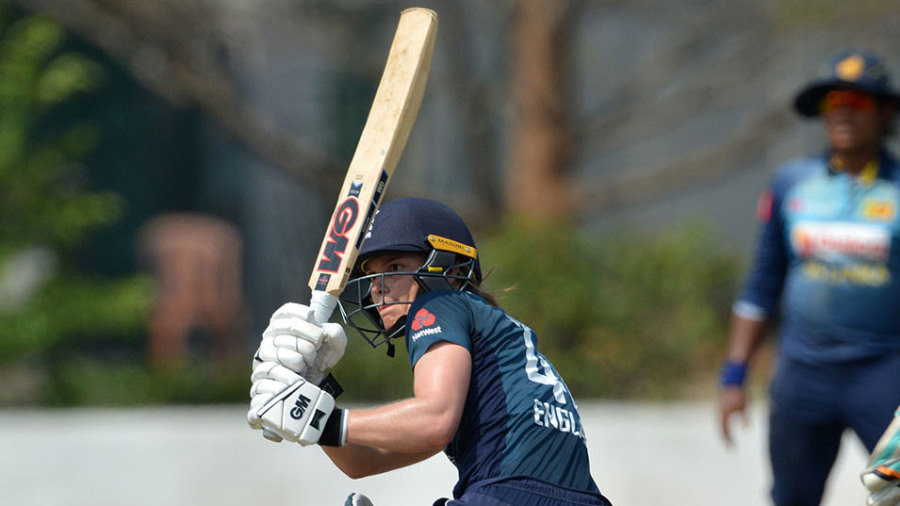 Amy Jones scored her third half-century in as many ODI innings to lead England to a comfortable eight-wicket win and 3-0 series sweep against Sri Lanka in Katunayake.

After winning the toss and electing to bat first, Sri Lanka, led by Harshitha Madavi‘s 42, were dismissed for 174 as the England bowlers shared the wickets around. Kate Cross, Anya Shrubsole, and Alex Hartley claimed two wickets apiece with wicketkeeper Jones running out Inoshi Priyadharshani on the last ball of their innings.

Opening the batting for England, Jones smashed 76 off just 58 balls with eight fours and three sixes, adding to her 79 off 71 balls in the first ODI and 54 off 39 in the second. By the time she was bowled by Shashikala Siriwardene in the latest fixture, England were flying at 127 for 1 in the 19th over.

Tammy Beaumont contributed 63 off 66 deliveries before she too was bowled by Siriwardene. That left Lauren Winfield and Heather Knight to put on the remaining 11 runs England needed for victory, which they secured with 143 balls remaining. Jones and Beaumont have now shared four century partnerships in 13 innings together.

Knight was pleased with the work her bowlers did to set up England’s successful chase.

“To come out here and perform like we did, we made it really clinical,” Knight said. “The bowlers really put a shift in actually, especially the seamers, it was so hot today. We had three shirt changes in the first innings … the spinners chipping in as well was really nice and obviously the way we finished it off made it look very easy.

“It isn’t always easy but to make it look like that is brilliant and the way [Jones] and Tammy put on the 100 partnership to set the tone for the batting and to finish off in 26 overs, I’m delighted.”

England won their rain-interrupted first ODI against Sri Lanka by 154 runs on the Duckworth-Lewis method and their second, also in Hambantota, by six wickets. Their series sweep means England moved to second behind Australia on the ICC Women’s Championship table, while Sri Lanka will be forced to play in the qualifying tournament for the 2021 Women’s World Cup.

The sides will contest three T20I matches in Colombo, starting on Sunday.