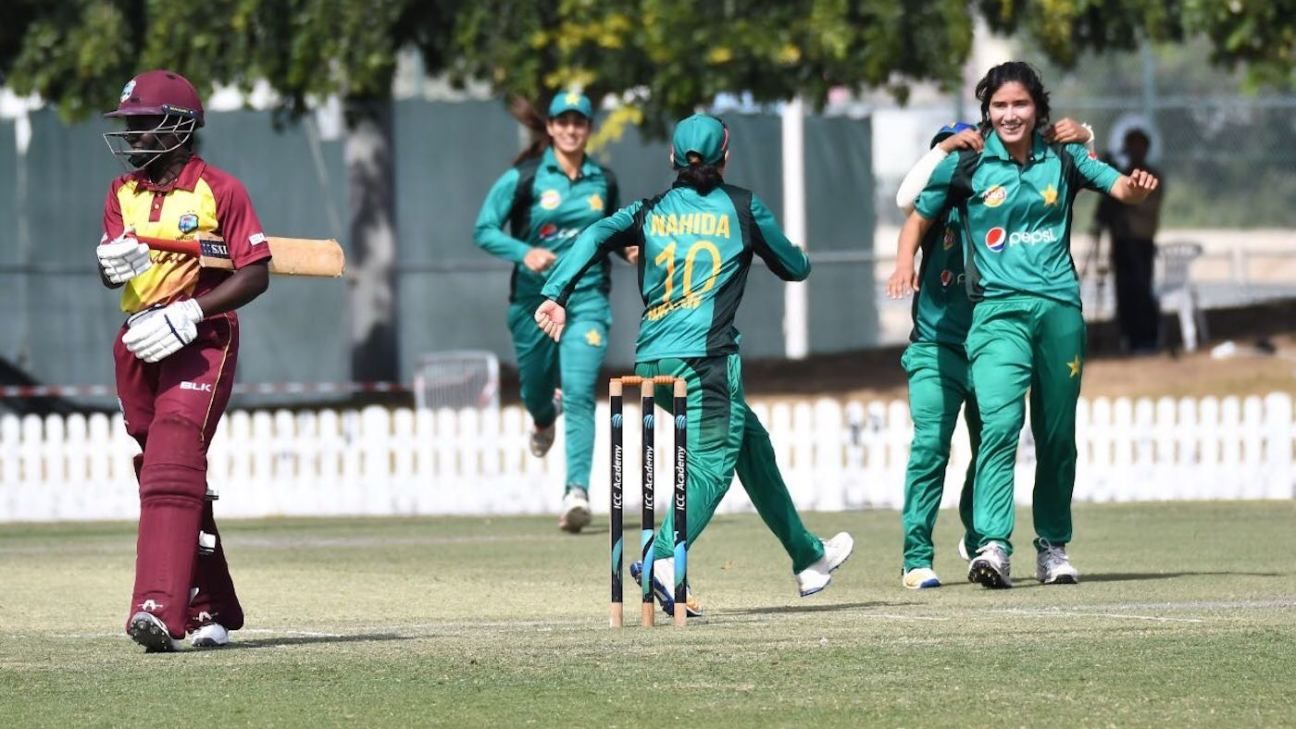 Brisk half-centuries from Sidra Ameen and Nida Dar, and stifling bowling shows from Diana Baig, Sana Mir and Nashra Sandhu helped Pakistan women level the three-match ODI series 1-1 in Dubai. After being dismissed for 240 in 49.4 overs, the hosts bowled West Indies women out for 206 in as many overs, as Baig claimed 4 for 34, Mir ended with 3 for 21 and Sandhu took 2 for 38 in their quota of 10 overs each.

Opting to bat, Pakistan were in a spot of bother at 52 for 3 after Nahida Khan, Javeria Khan and captain Bismah Maroof were all dismissed for single-digit scores. Opener Ameen, who fell for a duck in the previous ODI, and Dar then revived them with a century stand in under 20 overs. Ameen was, however, run-out for 96 by Stafanie Taylor after she had struck 14 fours. Dar, on 35 then, continued to steer the score past 200 with the lower order even though only one other batsman scored in double digits: Mir’s 21 off 30. Not long after Dar was trapped lbw by Deandra Dottin for an 86-ball 81 in the 48th over, Pakistan were bowled out when Sidra Nawaz and Baig were also run-out.

West Indies’ chase didn’t see a smooth start either; Baig struck early to send back Dottin, Shemaine Campbelle and Kycia Knight cheaply to place them on a precarious 27 for 3. After a brief resistance from Taylor and Chedean Nation that nearly took them to 100, Sandhu had Nation caught behind for 21 and Mir trapped Taylor lbw for 48 to reduce them to 94 for 5 in 27 overs.

With nearly 150 more still to get, No. 6 Natasha McLean hammered 82 off 76 with eight fours and two sixes, even as wickets fell around her. Even though West Indies were reeling at 144 for 9, McLean carried them past 200 with a stand of 62 for the last wicket with Shamilia Connell, who remained unbeaten on 15 off 28. But soon after McLean struck three consecutive fours off Kainat Imtiaz in the 49th over, she was caught and bowled by Dar in the last over, as the visitors fell short by 34 runs.

If Pakistan win the deciding ODI on Monday, they will overtake West Indies in the ICC Women’s Championship table by jumping from sixth to fourth place.