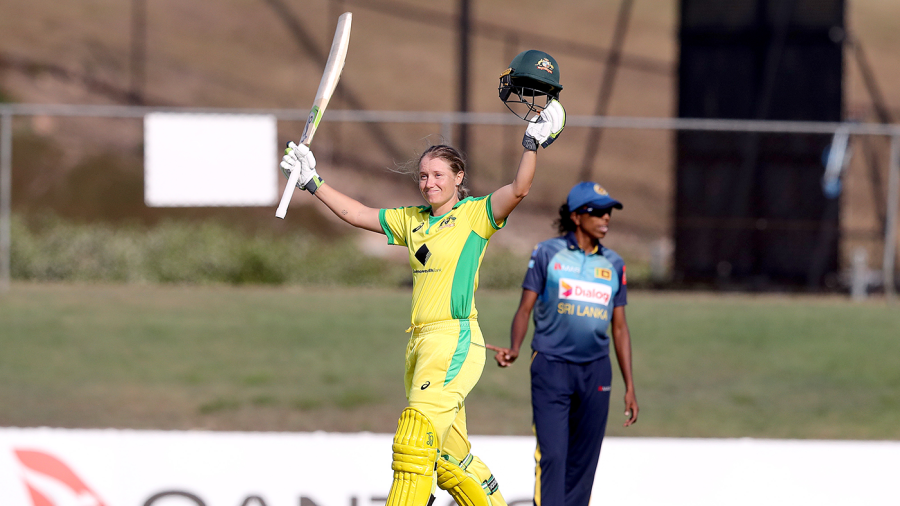 Alyssa Healy continued her prolific form by plundering a 71-ball hundred as Australia surged to a record-breaking 18th ODI victory in a row with a nine-wicket hammering of Sri Lanka.

Chamari Atapattu‘s 103, her fifth ODI hundred and her second century of the tour following her T20I ton in Sydney, anchored Sri Lanka’s effort but the next-best score was 24 and they could still only post 8 for 195 which proved way short of giving Australia a challenge. A 3-0 series result was nothing less than expected, but Australia’s ruthlessness was impressive.

Healy and Rachael Haynes, who backed up her maiden ODI century with 63 to take her tally to 237 runs in the series, cruised towards the target – although both were dropped in the same over off Achini Kaushalya – before Haynes was out sweeping with 37 runs needed.

Healy raced out of the blocks in the chase and Australia’s fifty came up in the sixth over. She should have been dismissed on 68 but was spilled at deep midwicket and Haynes was then given a life on 39, but even if held it’s unlikely the result would have differed.

Healy’s third ODI hundred, which have all come in the last two years during which time she has averaged 57.15, came with captain Meg Lanning alongside her and a match-winning six was a fitting way for Australia to set their new record, surpassing the 17 wins in a row Australia managed between 1997 and 1999 under the captaincy of Belinda Clark.

For the first time in the series Sri Lanka were able to set a target and there was a promising foundation at 1 for 68 before Harshitha Madavi was smartly run out by Healy’s direct hit as she ran round from behind the stumps after a badly misjudged single. They slumped to 5 for 87 as Georgia Wareham struck twice, but Atapattu held firm.

She added 49 with Ama Kanchana and 47 with Oshadi Ranasinghe, bringing up an impressive hundred off 120 deliveries, to put a seal on a tour where she has been head and shoulders above the rest of Sri Lanka’s batting.