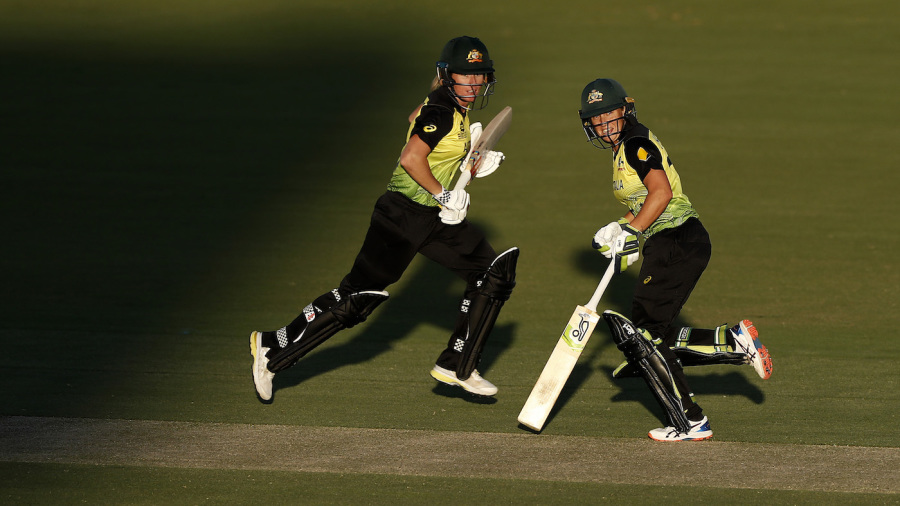 Australia flexed their muscles on the back of a record opening stand to set themselves up for a likely winner-takes-all final group match against New Zealand as Alyssa Healy and Beth Mooney added 151, Australia’s highest first-wicket partnership in T20Is, which propelled them to a handsome 86-run victory.

India’s narrow win in the afternoon meant that, barring Bangladesh causing an upset against New Zealand, or intervention from the weather, it had become a simple scenario for both Trans-Tasman sides without any complications from net run-rate which would have made the margin of this victory much more important.

Still, Australia will have wanted to lay down a marker after their stuttering start to the tournament in the manner they have been accustomed to against weaker opponents. Bangladesh had an awful night in the field as they dropped four chances amid Australia’s onslaught. With the bat, it appeared they may crumble early when they slipped to 3 for 26 but Nigar Sultana and Fargana Hoque added a 50 for the fourth wicket to provide a little encouragement amid the heavy defeat.

Australia’s batting has been nervy so far in this tournament but right from the start this felt like an innings where they would stamp their authority as Healy threaded three off-side boundaries in the opening over from Jahanara Alam. Wherever Bangladesh placed their cover sweeper, Healy picked the gap either side and within the first couple of overs fielders were moving all over the shop in response to Australia’s rollicking start. Healy swung the first six of the innings off Khadija Tul Kubra and by the end of the powerplay Australia with 53 for 0. In the eighth over consecutive sixes off the same bowler – a lofted drive over long-off and a slog sweep – took her to a 26-ball half-century.

Healy and Mooney eased past Australia’s previous best T20I opening stand – 121 between Ellyse Perry and Elyse Villani in 2015 – and significant errors crept into Bangladesh’s fielding which was suspect throughout the innings. Wicketkeeper Sultana was very slow getting the ball back to the stumps to try and stump Mooney on 47 and there were then three dropped catches in the space of 10 balls as Mooney got two more lives and Healy was spilled on 82 – a comfortable chance at backward point to Murshida Khatun. However, Healy fell three balls after her reprieve when she sliced a short delivery to point to miss the chance of a second T20I hundred.

For the first part of her innings Mooney – who had been Australia’s standout batter in the build-up to the tournament before missing out in the first two matches – ticked over at around a run-a-ball while Healy did her thing, but she upped the tempo impressively in passing a 40-ball half-century. She also showed some smart thinking when she took guard outside off stump to counter Alam’s attempts to bowl wide outside off in the closing overs, producing a flick over fine leg as she toyed with the bowling. Ash Gardner brought some brute force to the end of the innings as she clubbed 22 off nine balls having also been dropped at deep midwicket and the ball being parried over for six. There was a slightly bizarre sight on the final ball of the innings when Bangladesh reviewed for an lbw, but it soon became clear it was nowhere near and the players were off the field by the end the on-field decision was confirmed.

Megan Schutt removed both Bangladesh openers in the space of two balls, Khatun well caught at mid-on by Jess Jonassen and then a sharp inswinger dismantled Shamima Sultana’s stumps. There was then a maiden World Cup wicket for Annabel Sutherland, a sharp short ball gloved down the leg side by Sanjida Islam. That wicket may have added significance in its manner as having lost Tayla Vlaeminck, Australia would like someone to be an enforcer, although she did get taken for 13 in her third over as Fargana unfurled some thumping shots to suggest she could be batting higher than No. 5 before the innings faded away. The match closed with a team hat-trick as Jonassen’s wicket was followed by a brace of run outs. It was the type of convincing display Australia needed to put on. The big one is still to come.