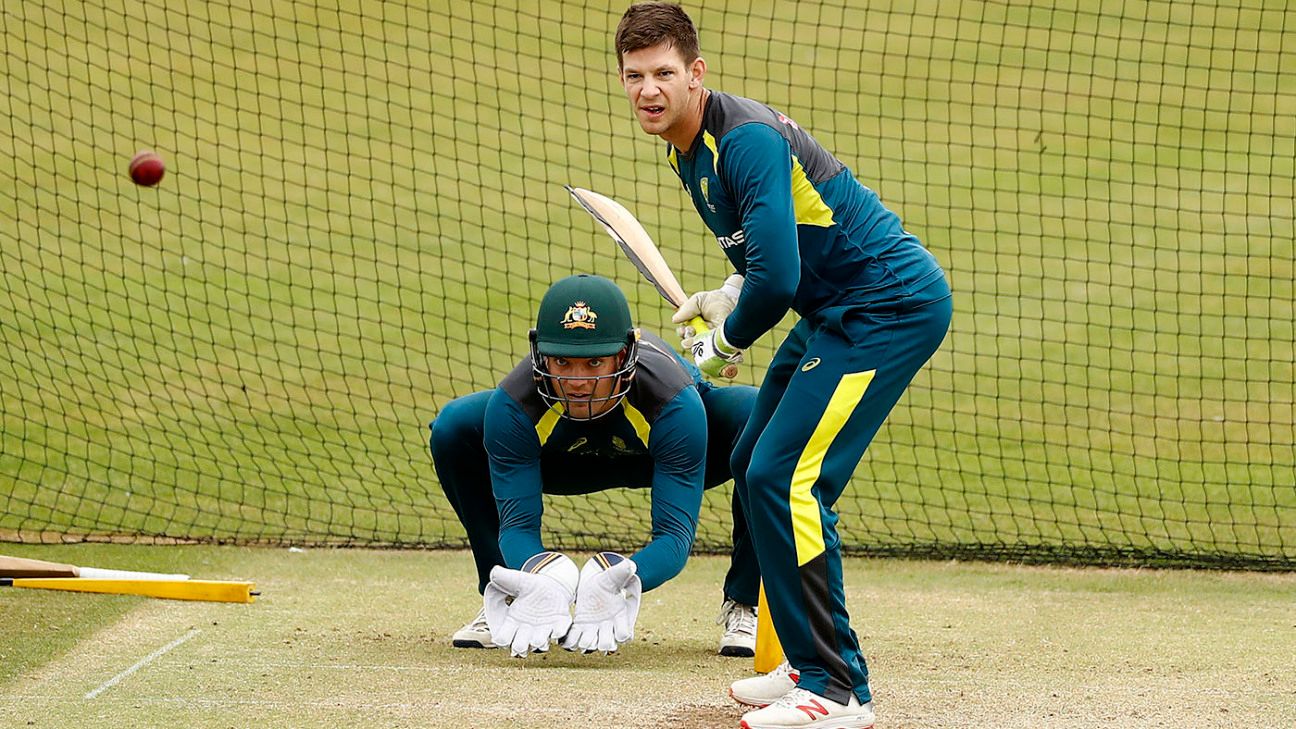 Alex Carey is “nipping at the heels” of Tim Paine but the future of Australia’s Test captain remains in his own hands, according to Adam Gilchrist.

It is not beyond the realms that the New Zealand series, which starts in Perth on Thursday, marks Paine’s last home internationals. After the Sydney Test in early January, Australia’s next assignment is a two-match series in Bangladesh in June before the next home summer.

Steven Smith’s leadership ban will be completed at the end of March which means he will be eligible for a return to captaincy, and Gilchrist picked out him and Pat Cummins as potential options to replace Paine. The upturn in Australia’s Test form this year has cemented Paine’s position and it appears unlikely he will be pushed out, but having turned 35 a few days ago there may also come a time when he feels it is time to move on.

From a batting point of view, Carey has made 143 and 73 in his last two Sheffield Shield outings and is the natural successor to Paine. It is a position Gilchrist has first-hand experience of, having been the man who replaced Ian Healy in 1999.

“I reckon while ever he is in the team he should be captain,” Gilchrist, who is a Fox Cricket commentator, said. “And then let’s see after these three Tests – that is the summer for him. See how he feels at the end of this summer. I feel it was more of a light-hearted comment when he said it might be his last summer. But like all players that are getting to that age bracket, it’s almost a summer-by-summer analysis.

“It’s almost like deja vu – not for him, but for me – when you’ve got a guy like Alex Carey nipping at his heels. He’s starting to show some really promising signs of consistency now in his Sheffield Shield cricket. With his overall game and where the attention gets drawn to is his run-scoring. His wicketkeeping seems to be extremely consistent. As is Paine’s. But Carey is now starting to really accumulate important runs in first-class cricket, so that is going to really put pressure on him.

“If he is playing next summer, Paine should be captain of the Australian cricket team. But we will have to see at the end of the summer if he is still in there – whether it’s his own personal judgement or the selectors’. As long as he warrants a spot in the team, he can keep leading the team. I’m amazed at the way he has helped rebuild and reshape the team after the disaster of South Africa.”

Though Paine’s Test average remains a modest 30.97 (he has barely been needed so far this summer with the prolific returns of Australia’s top order), Gilchrist believes he has a significant innings him should Australia need it.

“Tim’s chipped in with some really important innings,” Gilchrist said. “He hasn’t got the breakthrough runs but he plays a decent role with the bat. I’d be surprised if in this series there’s not a time when we’re under pressure whether it’s a 40, 50 or a 70 that he plays his role. He’s so experienced he can fulfill that. The only time the attention is drawn to him is if someone else is breathing down his neck that they may be able to add value.”

From Paine’s point of view, he said he had not given his future any more thought since the start of the international season. “In terms of competition, when you are playing for Australia as the wicketkeeper, there’s constant competition,” he said. “We are renowned for having excellent wicketkeeper-batsmen and that’s no different at the moment. As I touched on, it’s a great environment in our set-up and I’m enjoying every minute of it and will continue to do so as long as I can.”