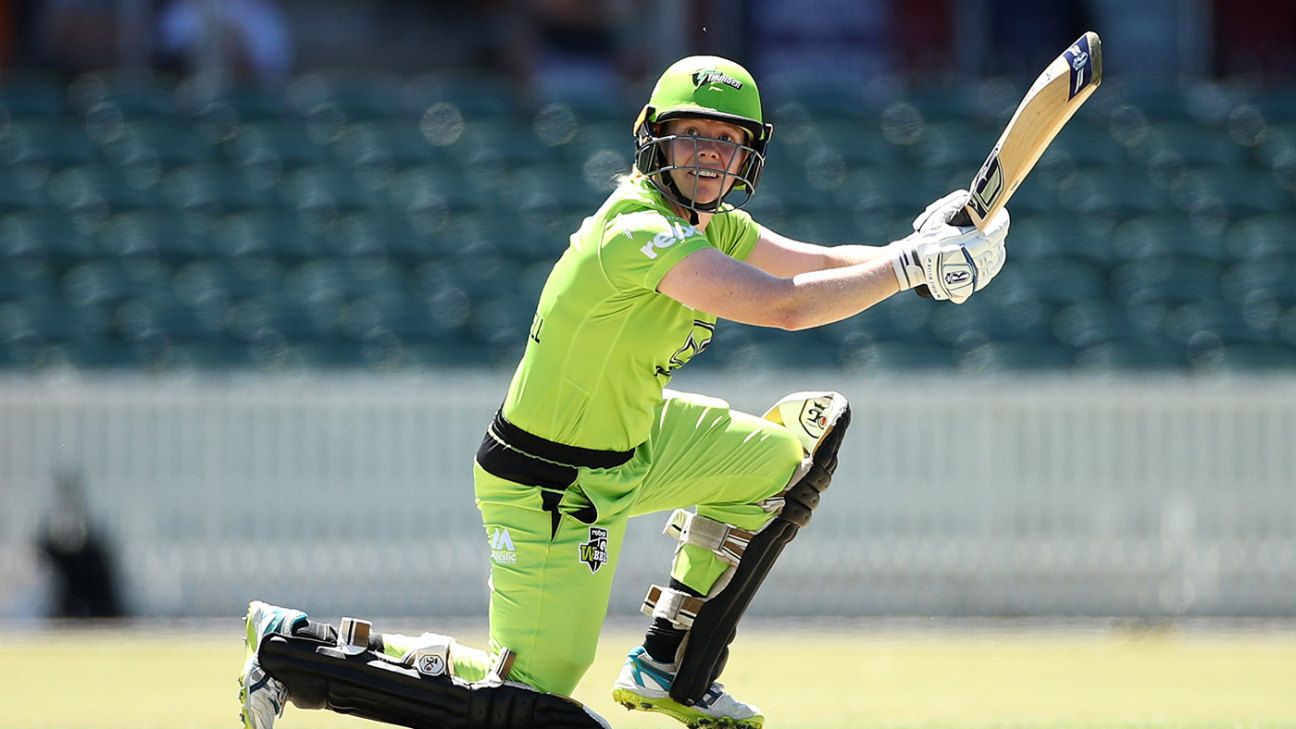 Alex Blackwell has announced she will retire at the conclusion of the WBBL season, bringing the end to an 18-year career during which she was the most capped Australian female player.

With the Sydney Thunder still holding a slim chance of reaching the finals quite when Blackwell’s final match will be is yet to be confirmed, but it could be that the game against the Melbourne Renegades on Sunday provides the swansong. She retired from international cricket in February 2018 after being capped 251 times for Australia.

Blackwell, who led the Thunder to the WBBL title in the inaugural 2015-16 season, is their leading scorer in this campaign, where she has had a key role in mentoring the Thunder’s group of young players, and hit 65 in their victory over the Melbourne Stars on Wednesday. It was after that innings that Blackwell told team-mates of her decision.

“I’d decided before the match that I was going to retire,” she said. “It’s got to come to an end at some point. There’s been many highlights, but what’s been really cool [this season] is watching the next generation of Thunder players grabbing their opportunities. It’s been very special to be a part of that – I’m really satisfied.

“I’ve been really happy with [the role of] mentoring out in the middle. I had an opportunity against the Stars to bat with [16-year-old] Phoebe Litchfield and Saskia Horley.

“It was good to talk to them about what the good options were to go to – and to help clarify in their minds what was on, and where to back themselves.”

Blackwell said that last season’s last-ball defeat in the semi-final against the Brisbane Heat had driven her to play another season.

“I was heartbroken, but also amazed, by last year’s semi-final. I, well, a little bit selfishly thought to myself: ‘I’ve worked so hard to get to this point and contributed to cricket for a long period of time for it to reach this point’.

“I thought the WBBL was an amazing competition to be a part of and decided I could go again – and I’m pleased I did. It’s been good fun, and I’ve enjoyed supporting Rachael Haynes because I think she’s led the team very well.”

Chris Botherway, the Thunder’s acting general manager, lauded Blackwell’s legacy across all parts of the game.

“Alex will be remembered as a Sydney Thunder legend,” he said. “She’s also one of cricket’s best ambassadors; proof the truly great players show class on and off the pitch.

“There are very few players who have done more than Alex to inspire boys and girls to fall in love with cricket, and many of her current teammates are among them. She has worked tirelessly to help build the culture we enjoy at Sydney Thunder. As someone who gave the club her all, Alex can retire knowing her legacy will endure.”