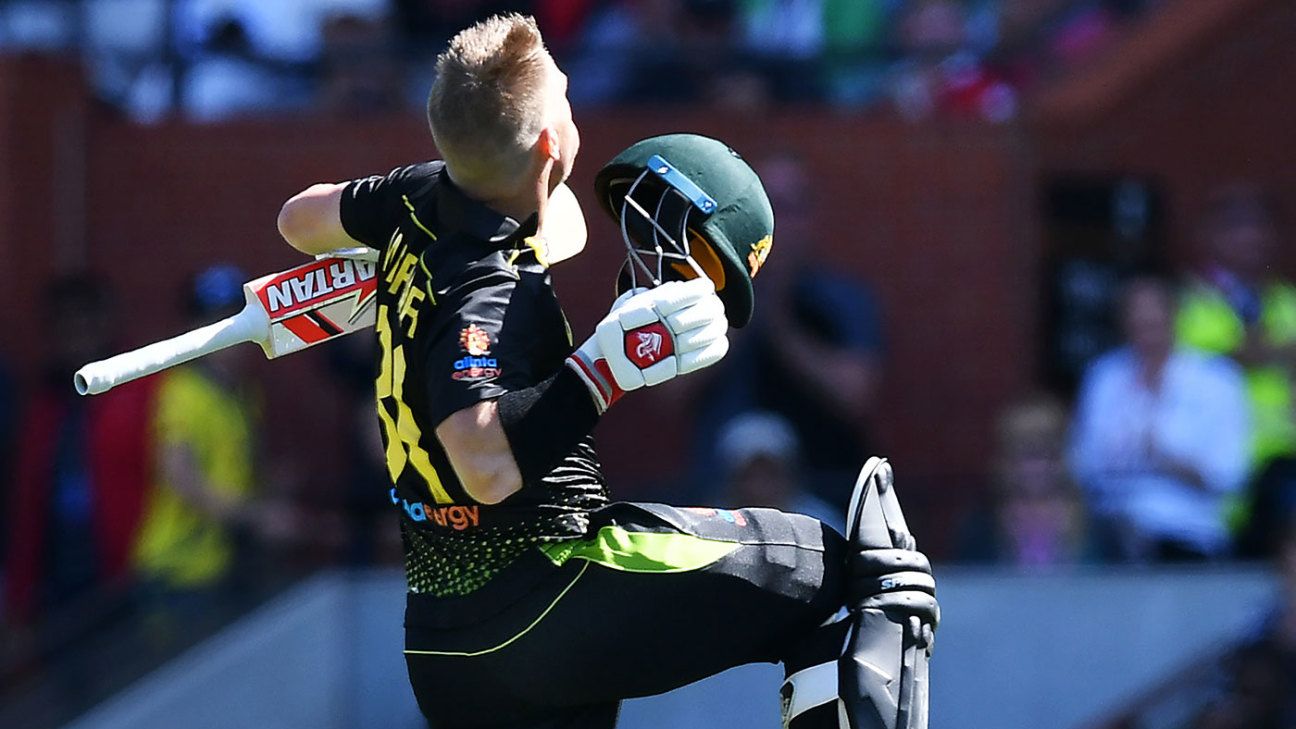 David Warner spent most of this year’s England tour trying to ignore the verbal bile constantly directed his way. So there was not only relief but also revelation in the experience of a loud, supportive Adelaide Oval crowd on Sunday, as the exhortations of 16,268 spectators helped lift him to a first ever Twenty20 international century on his 33rd birthday.

There had been queries as to exactly how Warner could be received in his first home match since the Newlands ban. Unlike Steven Smith, his public reputation hadn’t been bolstered by match-winning turns during the Ashes series. But from the moment he took to the middle, Warner was given plenty of adulation to feed off, and admitted that he had almost forgotten what it was like to get the support at home, his first appearance in more than 18 months.

“It’s always fantastic to get that. You sort of sit back and watch highlights of other people’s packages and stuff, you forget how much it actually drives you when you’re out there,” Warner said. “We love the people’s support and we love the Australian crowds coming out and supporting us and we always try and put on a show for them.

“But I don’t think they actually realise how much impact it has on us players while we are out there. I remember when I was supporting the [Sydney] Roosters in the Grand Final this year. When you’ve got that support behind the team or when you’re supporting someone else, it’s a massive boost, the confidence for us and for the other people out there playing.”

“Emotions were great. Another year older. Another game for Australia and coming out here in front of an Adelaide crowd. There’s no better place to play you know. You’ve always got a fantastic wicket, the curators are absolutely fantastic here. It’s a batting paradise. I absolutely love it out here.”

The most notable element of Warner’s innings was the fact that in a T20I career dating back to 2009, he had never bettered the 89 he coshed against South Africa at the MCG on his storied international debut. More than a decade later, he was able to scamper a last ball single to go to three figures, a milestone that afforded him some light-hearted banter from Glenn Maxwell at the change of innings.

“You don’t even actually realise until you get it. It wasn’t even on my mind. You actually forget that you don’t have one,” Warner said. “Maxi reminded me and said ‘welcome to the club’ which is quite funny. It’s just one of those things to contribute, come out and play you free-flowing game from the start. Obviously the couple of balls where a little bit here and there. You don’t get to face too many deliveries back to back when someone’s going off.

“For me it’s about keeping a calm head and making sure that I bide my time a little bit and try and pick the gaps as much as I can and run hard. [Last over] bat on ball and I was thinking obscure field so for me you know what you’re going to get. It’s going to wide and pretty much, I don’t lap or anything like that so whatever comes into my mind I try to get it out of my head.

“It was in my head but you’ve got to try and pick your gaps. I think in Australia with those fields, you only have to hit the gap hard and it can beat the fielder and then you can run two. You’re always thinking at the start of the over about what do we need. Obviously we had plenty on the board so you’re just trying to hit gaps.”

It wasn’t just Warner who enjoyed his place in the sun. Aaron Finch, Maxwell and Australia’s bowlers all responded with a combination of skill and flair that completely confounded a modest Sri Lanka, suggesting that if the Australians stay focused, they can set-up more pageants of adulation in Brisbane and Melbourne this week.