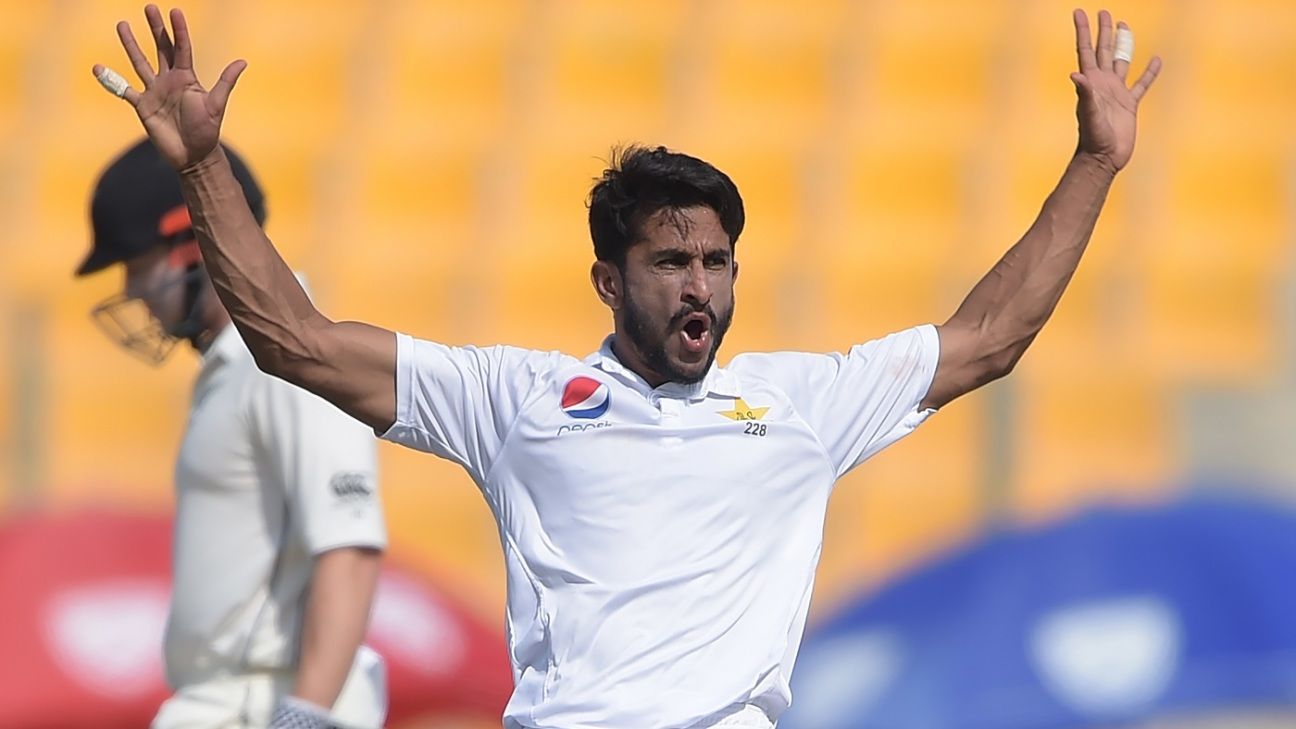 Hasan Ali is injured again, days after recovering from a back injury that took seven weeks to heal. The latest one is a rib fracture that is set to rule him out for at least another six weeks. This automatically rules him out of the two home Tests against Sri Lanka next month.

“Fresh CT scans revealed cortical rib fractures involving the ninth rib on the right side and eighth and ninth ribs on the left side,” a PCB spokesman said. “The fractures will require up to six weeks of healing. He will start a rehabilitation process at the National Cricket Academy from Monday.”

Hasan last played for Pakistan in June. Since then, he has featured in just the Quaid-e-Azam Trophy opener in September. Earlier in the week, he was cleared to play the last two rounds of the first-class competition and even joined his side Central Punjab in Karachi. During training, he complained of sudden pain in his left side after which the fractures were revealed.

ESPNcricinfo understands that Hasan received the clearance to play from Sohail Saleem, PCB’s director for sports and medical sciences. He had been bowling approximately 50 overs a week at the NCA in Lahore. It is yet unclear how he sustained the rib fractures.

Hasan’s injury comes at a time when the team management is in search for a genuine quick to complement the existing pace pack in Australia. Over the years, Pakistan have invested significantly in Hasan, because of which he became an automatic pick across formats under previous head coach Mickey Arthur.

Pakistan’s long list of injuries in Australia forced them to field 16-year old rookie Naseem Shah and 19-year old Musa Khan. While both are quick and touch the 145kph mark, their lack of experience has shown. Pakistan’s Test captain Azhar Ali touched upon the dearth of genuine quicks ahead of the second Test against Australia in Adelaide.

“It’s been five-seven years now that we’ve been struggling without proper fast bowlers,” Azhar said. “I think the nature of the ball and our first-class cricket pitches meant that there was no need for really genuine fast bowlers. You could manage with medium-pacers, who were taking a lot of wickets. Teams were being bundled out in within 30-40 overs.

“That really made openers in Pakistan redundant. Like their job was to only come to the ground. The batting began at No.5. The conditions were such that pace-generating bowlers weren’t being encouraged. Look at what’s happening this year. There are hardly any pacers with wickets.”

“That’s because for five-seven years they got away without bending their back. Now there’s a need to put some effort and it’s changing. If this continues in their vein, if we get flat wickets where just swinging the ball at medium-pace isn’t enough and you have to put more into it, then you’ll get more bowlers.”