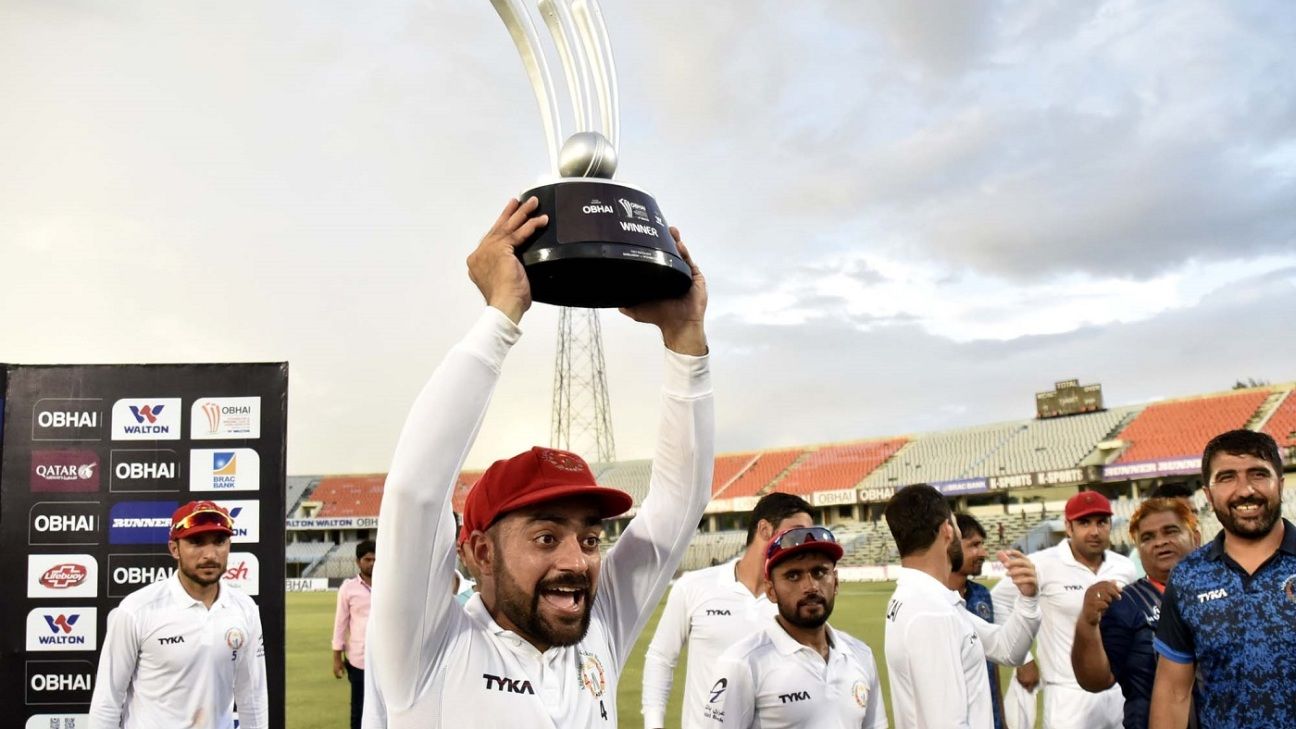 Don’t let Afghanistan’s two-day loss on their Test debut against India fool you. Incidentally then, Phil Simmons was their head coach. Today, he’s in the opposition camp, perhaps with a bank of knowledge he’d want to share with his West Indies team. Since that insipid debut, of course, Afghanistan have beaten Ireland in India and Bangladesh in Bangladesh. If they beat West Indies in Lucknow, they’ll become the only team in the history of the sport to win three of their first four Tests.

The possibility is real. Under captain Rashid Khan, who has taken three five-wicket hauls in his last four Test innings, Afghanistan will run into a wonky West Indies batting line-up. The win in the T20I series should boost the ‘hosts’ to that effect. In their last three Tests, only twice have the West Indies batsmen gone past fifty. On a ground that is hosting it’s maiden Test, there are a lot of unknown variables, not least of all the pitch. Against a spin-based attack, West Indies will be tested.

That said, Afghanistan would also do well to worry about their batting batting weakness. Barring Rahmat Shah, few have shown the tenacity to bat long. In both of Afghanistan’s Test wins, Rahmat’s contributions have been as integral as Rashid’s. But with senior allrounder Mohammad Nabi having retired from Tests, someone else too needs to step up.

For West Indies, the series is about showing that they aren’t falling behind in the red-ball format. For Afghanistan, it’s time to say that, they too, possess the quality to find a spot in the next cycle’s World Test Championship.

It appears that the job of filling the Nabi void has been given to 21-year-old allrounder Karim Janat, who has earned a Test berth after a splendid T20I series against West Indies. He struck an 18-ball 26 in the first game, then took 5 for 11 in the second before finishing the series with 1 for 33 in the third. He can find speeds of 140kph regularly, and with his elder brother Asghar Afghan there for company, Janathe can find an arm around him for comfort, instead of being intimidated by the prospects of a main Test appearance.

The form that made Kraigg Brathwaite ESPNcricinfo’s opener of the year in 2016 has gradually diminished as the decade comes to a close. He’s gone 19 innings without a Test fifty, and since February 2019, his only first-class century was one for Glamorgan in the English County Championship. It’s West Indies’ last Test match of the year, and with no other Test till they face England in June 2020, the team’s seniormost batsmen will ache to end 2019 with an impactful performance.

Afghanistan coach Lance Klusener said it would be desirable to keep faith with the XI that won the Test in Bangladesh, though they’ll have to find a replacement for the retired Mohammad Nabi of course. Given the way Karim Janat performed in the T20Is, and that he offers an all-round option, he could well be the man to replace Nabi, even though he bowls seam up rather than spin. Afghanistan having plenty of spin options already with Rashid, Qais and Zahir.

Rahkheem Cornwall had an ice-pack strapped to his left knee and didn’t take part in the warm-up drills or training session for West Indies. Coach Phil Simmons, however, said a final call on Cornwall would be taken only on the morning of the match. John Campbell is recovering from a stomach bug.

The match will be played on the same surface as the second ODI was played on. It’s a red-soil pitch, and is expected to aid spin bowling. Expect foggy mornings at the onset of winters up north in India. As such, conditions for red-ball cricket is relatively unknown at the ground, with only three first-class games being played at Lucknow since 2017.

“Obviously one day I’d like to play at ‘home’ home, but this is home away from home for us. The surfaces have suited us, and that’s the important thing if you’re going to have home advantage”.
Lance Klusener , Afghanistan coach.

“They’ve had three Tests, and did well to win in Bangladesh, but it’s still a learning phase for them and hopefully we can capitalise on that.”
Phil Simmons, West Indies coach

With inputs from Saurabh Somani in Lucknow