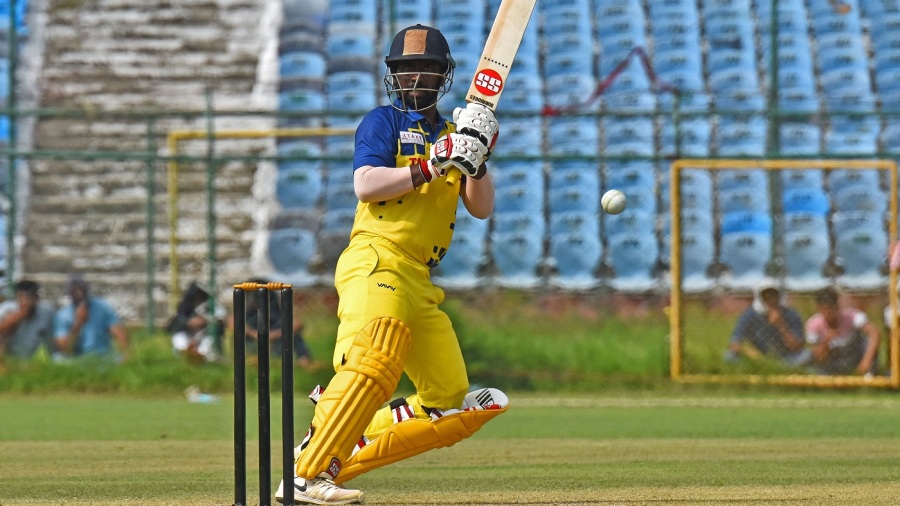 Abhimanyu Mithun rang in his 30th birthday in style, picking up his first five-wicket haul in List A cricket, and finishing off Tamil Nadu’s innings with a hat-trick at the M Chinnaswamy Stadium in Bengaluru.

Tamil Nadu couldn’t build on a strong foundation laid by Abhinav Mukund and B Aparajith, and were bowled out for 252 in 49.5 overs in their Vijay Hazare Trophy 2019-20 final against Karnataka.

Mithun had struck the first blow by removing M Vijay for a duck in the first over. He got his second wicket later in the 46th over, when Karun Nair plucked a fine catch at long-on, keeping his balance and holding the ball behind him. This, after Vijay Shankar couldn’t get enough elevation to clear him. It was an important strike, with Tamil Nadu looking to build momentum in the final overs through Vijay Shankar and semi-final hero Shahrukh Khan.

In the final over of the innings, Mithun wiped out Shahrukh, M Mohammed and M Ashwin, all caught on the off-side trying to hit big, but not connecting well enough.

Mithun had set Tamil Nadu back at the start, stymied their late assault, and erased any hopes of finishing with a flourish. He returned 5 for 34 in 9.5 overs.

Earlier, Manish Pandey had won an important toss on an overcast morning, and as has been the template for Karnataka in their recent games, he opted to chase.

Tamil Nadu did well after losing Vijay early and promoting R Ashwin to No.3 to negate the threat of the new ball – which has nipped around consistently in the early exchanges throughout the tournament. When Abhinav and Aparajith got together at 24 for 2 in eight overs, the new-ball threat still remained, but they put together an exemplary stand. They were both cautious at the start, respecting the conditions, but began to find the gaps and the boundary more regularly as they settled. The first half of their stand yielded 50 runs in 11 overs, the second half brought 74 runs in 12 overs.

Abhinav’s dismissal for a well-made 85 off 110 balls, caught at extra cover off the toe-end to give List A debutant Prateek Jain his first wicket, started Tamil Nadu’s slide. In Vijay Shankar, Dinesh Karthik and Shahrukh, they had the personnel to go big, with Aparajith having fallen in the 31st over. But every time Tamil Nadu looked like they would launch, the Karnataka bowlers and fielders conjured a wicket to rein them in. Aparjith’s run out for 66 off 84 balls while ball-watching and not realising Vijay Shankar had declined a second off a misfield, didn’t help.