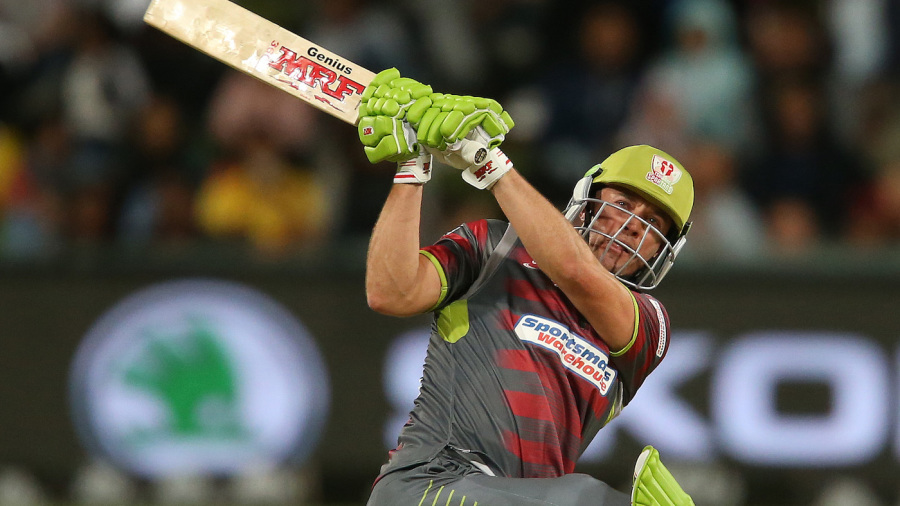 The Tshwane Spartans moved to the top of the Mzansi Super League table, with an eight-wicket bonus-point victory over the Paarl Rocks. Three teams – the Spartans, Rocks and the Nelson Mandela Bay Giants are tied on 19 points – with the Spartans leading the pack on net run-rate. As things stand, these three teams will battle it out to host the final, but the Durban Heat and the Cape Town Blitz will have opportunities in the coming week to make up some ground.

AB gets a move on, a let-off and the win

The Spartans’ chase seemed to be drifting despite the team knowing the importance of a bonus point and they reached the halfway stage of their innings on 63 for 2, effectively half the total of the Rocks. And then AB de Villiers had enough. In his 300th T20 match, de Villiers reminded viewers who the boss of this circuit is. He took 19 runs off Hardus Viljoen’s third over, which also contained a wide, and three of the biggest sixes seen at this tournament.

Viljoen went short too many times and de Villiers sent him over the leg-side boundary each time, with his sixes flying progressively further as he went. In the next over, de Villiers placed and timed a pull off Tabraiz Shasmi perfectly to bisect the fielders on the leg-side boundary but then made a mistake when he top-edged the left-arm wristspinner. Wicketkeeper Mangliso Mosehle and Henry Davids at first slip were both going for the catch, which should have been Mosehle’s, and the ball eventually fell between them. De Villiers went on to finish with an unbeaten 69 off 37 balls to take his side home in 15 overs.

The Rocks had raced to 29 off their first two overs but things swiftly went wrong from the their third.They added seven runs in the first four balls before Henry Davids was bowled by a Morne Morkel snorter than rattled middle and off stump. The Rocks lost all 10 wickets for 90 runs and their next highest stand was only 22. They were bowled out with two balls to spare.

Forget the Dilscoop, Faf du Plessis has invented a shot of his own and he brought it out against his old national team-mate Morne Morkel. Before Morkel had even released the delivery, du Plessis walked outside his off stump, bent his right knee to the ground and then flicked the length ball over his left shoulder and down to fine leg. Dane Piedt, on commentary, confirmed it’s called the Dupscoop. Unfortunately, du Plessis did not have the chance to do it again. Four balls later he gifted a catch to mid-off and was dismissed for 19.